Harvest and the Mortgage Lifter 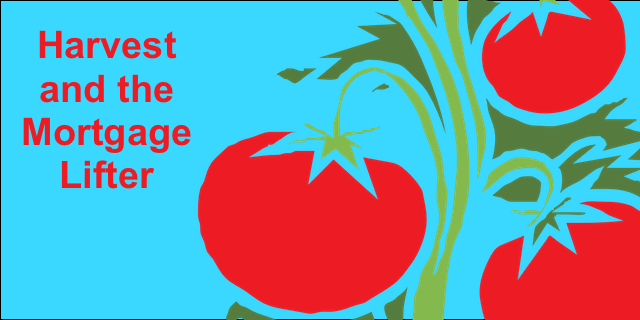 I’ve been trying to figure out the difference between heirloom plants and hybrid plants because I came across a story of a special tomato plant from West Virginia on public radio called the Mortgage Lifter. The creator of this plant was a man with the last name of Estler: William Estler.

The funny thing is, the last name of one of my father’s dearest friends was Estler. Dad always talked about the “best tomatoes he’d ever eaten” being from West Virginia and called the Mortgage Lifter. Coincidence?

The other “Mortgage Lifter” was created by a man named MC Byles who lived in Logan, West Virginia. This tomato is called Radiator Charlie’s Mortgage Lifter. Some say he started his tomato in the 1930s, but according to a taped interview with Byles (conducted by his grandson) it was in the early 1940s. The story goes that he used a german johnson tomato and crossed it with four of the largest tomatoes he could find. Then in the 1980’s he sold the seed to Dr. Jeff McCormack, founder of Southern Exposure Seed Exchange, a seed catalog company out of Charlottesville Virginia. In 1985, McCormack put the story of how Byle used the money from selling his tomato plants for $1 a piece to get out from under his $6000 mortgage.

All these Mortgage Lifters were developed from crossing several varieties of tomato plants. The breeders who developed them would collect the best seeds and replant them. Once the seeds produced true to type for several seasons, they were able to say, this is a new variety or cultivar, name it and share or sell the seeds.

The definition of the heirloom plant is actually debated. Some say the cultivar needs to be over 50 years old; others say over 100 years old. But no matter what, the seeds all grow true. The plant pollinates naturally, with pollen spread from one plant to another by insects or the wind. The seeds carry the parents’ genetic material, meaning that it will look like its parent plant. And the seeds can be saved and planted again to obtain the same plant. This is not necessarily true of hybrids that are sold today by the larger companies.

According to the New York Times, four companies control more than 60 percent of all the world’s seed sales. But there are local efforts to save heirlooms and share them through seed swaps. Families are growing these heirlooms and perhaps even attempting to cultivate new ones.

Harvest festivals in the autumn, along with Thanksgiving in the US, celebrate the bounty of the harvest and give thanks for successful crops prior to the coming of winter. Listen to the story of the Estler’s Mortgage Lifter tomato, a very special tomato, and enjoy. And while you are sitting down to your Thanksgiving feast, consider what you might like to see on your table next year. Could it be an heirloom? Go online and start researching you seeds now. Will you choose a Mortgage Lifter or a smaller Yellow Pear tomato (only 2-2.5 centimeters in length? The choices are di-vine.