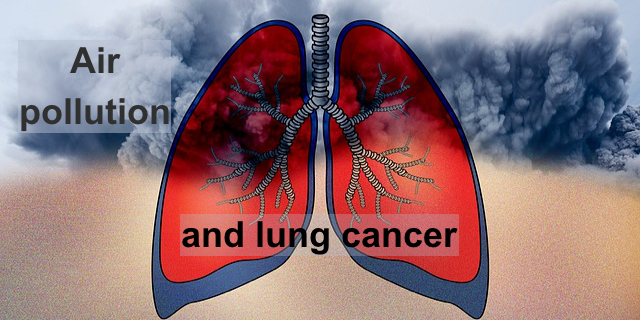 While smoking remains the primary cause of lung cancer, 10 – 20% of people who develop non-small cell lung cancer (NSCLC) never smoked. NSCLC in non-smokers happens more often to women, and at an earlier age, than it does in smokers.

What would cause cancer to develop without smoking? [1]

One theory is that environmental factors, including radon and air pollution, contribute to the cause. However, there wasn’t proof of how the ingredients in air pollution, called particulate matter (PM), directly interact with lung tissue to stimulate the tissue toward cancer.

A remarkable study from the European Society for Medical Oncology (ESCO) 2022 congress shows the links from air pollution to specific molecular behavior in lung tissue that support tumor growth. These findings have implications for public environmental health and for future individual screening and treatment. [2]

Hazy air has fine particles floating in it. Bigger particles irritate the lung tissue.  One size, particulate matter 2.5 (PM2.5), is known to be a problem.[3]

Even though PM2.5 particles or droplets in the air are only two and one half microns or less in width (so small they can only be seen by a microscope), these particles flow right into the lungs where they affect lung function. In healthy people, they can cause irritations, like sneezing. However, in people with lung or heart disease, they can have serious consequences, affecting the person’s breathing. When the level of PM2.5 increases, so do the number of hospital admissions, emergency department visits, and deaths. Therefore, measuring particulate matter is a way of measuring air pollution. [3]

In the ESCO presentation, the researchers validate that increasing PM2.5 concentrations is significantly associated with one specific kind of NSCLC. They analyzed samples from 447,932 individuals in the UK Biobank.  People in England, South Korea, and Taiwan exposed to higher concentrations of PM2.5 are more likely to have NSCLC with mutations in the EGFR gene. This links air pollution with a specific mutation in one kind of cancer. [4]

The researcher’s next step was to move into the lab. They grew cells with two kinds of mutations associated with lung cancer, EGFR and KRAS, exposing some of them to PM2.5.

Exposure promoted rapid changes in airway cells with the mutations, “driving them towards a cancer stem cell like state.”  The pollutants caused an increase in an inflammatory mediator known to promote cancer, Interleukin 1-β. The cells without the mutations didn’t do this. [5, 6]

Adding a molecule to block Interleukin 1-β eliminated the tumor progression. This links the pollutants directly with a cancer-promoting mechanism in cells with a specific lung cancer mutation. [5]

As if that were not enough, the researchers show that EGFR mutations are found in people who don’t have cancer. Using deep mutational profiling on normal lung tissue samples, they found EGFR mutations in 18% of lung tissue, and KRAS mutations in 33%. They attribute this mutation in normal tissue to “a likely consequence of aging.” Their experiments show that a mutation found in noncancerous lungs can be stimulated into an inflamed state associated with cancer by exposing it to PM2.5 — that is, to air pollution. [4, 5]

The same particles in the air that derive from the combustion of fossil fuels, exacerbating climate change, are directly impacting human health via an important and previously overlooked cancer-causing mechanism in lung cells. The risk of lung cancer from air pollution is lower than from smoking, but we have no control over what we all breathe. Globally, more people are exposed to unsafe levels of air pollution than to toxic chemicals in cigarette smoke, and these new data link the importance of addressing climate health to improving human health. [5]

Right now, profiling lung tissue in non-smokers for common mutations is too invasive, too expensive, and wouldn’t provide information that doctors could treat. We do not know enough to act on what we find.

Swanton says, “The next step is to discover why some lung cells with mutations become cancerous when exposed to pollutants while others don’t.” Another scientist, Tony Mok, Chinese University of Hong Kong, who was not involved in the study, agrees. “[T]he promise of molecular screening for non-smokers is still premature,” but “these data are exciting and intriguing and may signal a new era of chemoprevention in lung cancer.”

These findings also show another way climate change affects individual health. As Mok says, “[W]e have a strong mandate for tackling these issues – for both environmental and health reasons.”[5]