Predicting the Risk of Getting Type 2 Diabetes: How do they know? - Medivizor
SIGN IN

Navigation Menu
Home » Blog » Predicting the Risk of Getting Type 2 Diabetes: How do they know?

Predicting the Risk of Getting Type 2 Diabetes: How do they know? 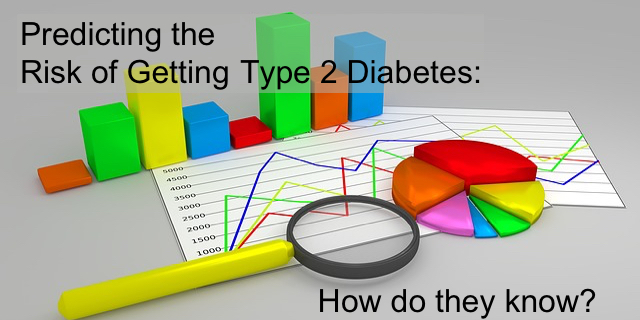 Are you ever skeptical when you see drug claims? One of my first questions when I read about a new drug or a statistic of some kind is: How do they know that? When I read about two new weight loss drugs presented at the European Association for the Study of Diabetes (EASD) in Stockholm, Sweden (19-23 Sept), my antennae went up. Here’s the story.

A new study shows that a weight loss drug, semaglutide, works to lessen the likelihood of developing Type 2 Diabetes (T2D) by over 60%, says Dr. W. Timothy Garvey of the Department of Nutrition Sciences, University of Alabama at Birmingham, Birmingham, AL, USA.[1]

Semaglutide is only one drug in a group called incretin mimetics, drugs used to treat T2D that work by mimicking the effects of natural hormones that help control blood sugar levels after eating. Another presentation at EASD about an incretin mimetic, tirzepatide, finds that this drug also supports patients with T2D achieve blood sugar control and weight loss goals. Their study says that it does this better than semaglutide.  [2] [3] [4]

Weight loss by any method does the same

We also know that losing weight is hard.  The sobering statistic is that about 90% of people who lose a lot of weight eventually regain almost all of it. The FDA approved these two drugs and others because the clinical trial evidence shows they helped people sustain weight loss better than they did without them.

How do they know?

But how did they figure that out?

Whenever a drug makes a claim, such as “this drug reduces the likelihood of developing T2D by 60%,” the first thing you should wonder is how they came to that conclusion. What’s the evidence?  How do you figure out that not only is a certain risk reduced, but even by how much, and predict it 10 years into the future?  Let’s take the semaglutide study as an example.

The Premise of the Study

So, in theory, taking a 2.4 mg weekly dose of semaglutide should reduce a person’s weight, which, in turn, lessens their likelihood of developing T2D.  Dr. Garvey and his colleagues decided to find out exactly how much semaglutide reduced the risk of developing T2D within 10 years.  [6]

They took the original patient data from the 2021 semaglutide approval studies. Using a validated tool called CMDS (Cardiometabolic Disease Staging), they ran each study participant’s clinical data through the CMDS formula and looked at the total scores.

What is a CMDS stage?

CMDS divides patients into groups depending on the number of metabolic conditions they already have.

Here is how the stages progress: By Stage 1, you have Metabolic syndrome, a cluster of conditions that occur together, increasing your risk of heart disease, stroke and type 2 diabetes, but you don’t have IFG (Impaired Fasting Glucose). By Stage 2, you have IFG, IGT (Impaired Glucose Tolerance), or metabolic syndrome without IFG. Having either IG or IGT means you are considered prediabetic.  By stage 4, you already have a diagnosis of diabetes and/or cardiovascular disease.  [8] [9]

So how did they validate the CMDS system as a good model for predicting future events? [7]

…the authors concluded that, mathematically, the likelihood of having either T2D or CVD within 10 years increases by a certain percentage depending on the stage.  There’s a predictable jump in the numbers between each of the stages. For example, in one of the studies used to validate CMDS, they found that Stage 1 patients were 2.8 times more likely to develop diabetes than Stage 0 patients, and Stage 3 patients were 23.5 times more likely to develop T2D. The more disease factors you have, stage by stage, the more you are likely to be diagnosed with the disease within 10 years. [7]

The fact that the increase in risk between each stage is measurable and predictable means you can calculate individual risk.  That’s where they arrived at the conclusion that taking a 2.4 mg weekly dose of semaglutide decreases the 10 year risk of developing T2D by 61%.

What we don’t know

What we do not know is how tirzepatide would do using the CMDS mathematical model, or how Mayo Clinic’s program of weight loss or any offered weight loss program would fare using this mathematical model. Would the weight loss achieved by these other methods match the results with semaglutide? It’s not easy to make drug comparisons when the drugs are being evaluated with different statistical methods. For example, the study comparing tirzepatide’s performance with semaglutide used different criteria and a different dose of the drug. They say it performed better — but using which dose, and for how long?

Fortunately for all of us, there is the scientific method. If a scientist makes a claim, or a medical advertisement does, there has to be evidence supporting that claim.The FDA approved both of these medications based on clinical trials showing they support weight loss better than a placebo. This allows others to examine the evidence and see if they come to the same conclusion. The two different presentations at the EASD conference both say that their drug supports weight loss; the two companies now have to create evidence about whose works better, and scientists and others will also examine those results to see if they hold up logically.

The truth is that losing weight and keeping it off is hard work. There is some evidence that drugs like incretin mimetics give people the extra boost they need to change the trajectory of their future away from T2D and toward a healthy metabolism.  As the Mayo Clinic says, a 7% weight loss is equivalent to a 60% less chance of developing diabetes. It doesn’t matter by which method you get there.

It is up to you to decide if you agree with the methods the researchers used to get to those numbers. If you don’t have the scientific background to run the numbers yourself (I certainly don’t), you can decide if you trust the honesty of the sources. When scientists present their findings to other scientists and the public, this is what they are asking: Do you agree with how I got these results?

Image by Colin Behrens from Pixabay