Navigation Menu
Home » Blog » 50 Years of “Our Bodies, Ourselves”

50 Years of “Our Bodies, Ourselves” 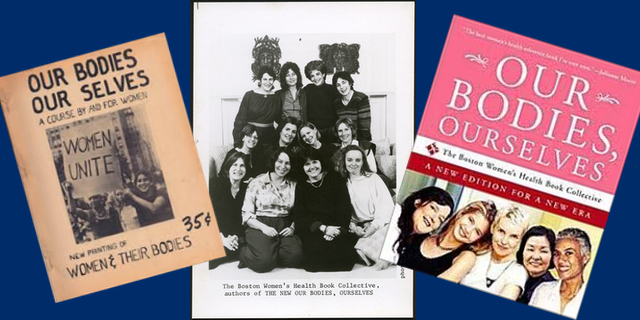 In 1969, at a workshop about women’s bodies and health in the Boston area, 12 women met to discuss their experiences with doctors. As they talked, they realized commonality in their stories. First, all of the women shared that they had felt ignored or dismissed during their interactions with physicians and second, all noticed that they didn’t really know their anatomy.

There is a tendency to forget the facts about life for women in the US at this time. Only four years before, the Supreme Court legalized contraceptive use for married couples (Griswold v. Connecticut). Contraceptives could not be used throughout all 50 states by unmarried women until a 1972 decision by the Supreme Court (Eisenstadt v. Baird). In 1969, it was legal for private employers to refuse to hire women with preschool age children.

The 12 women decided that they should meet again after their workshop and they did, forming the Doctor’s Group. They resolved to do research about their anatomy and write papers. Compiling these papers into a 193-page workshop booklet in 1970, they called it, “Women and their bodies.” They held courses for other women, sharing the booklet as a course manual. In 1971, the New England Free Press printed the manual, retitled “Our Bodies, Ourselves.” By word of mouth, over 250,000 copies were sold. Two years later, publisher Simon & Schuster published the first commercial version.

As one founding member of the Doctor’s Group, Norma Swenson, said in a recent interview, “There was nothing else like it out there at the time.”1 She described the books that were available about women’s health as “‘scary…mostly about diseases’ and dying of childbirth.” The book discussed not only women’s anatomy but also addressed the myth that women were inferior to men. One chapter details a phone call.

Salesman: Hello Mom.
Mrs. Hunt: yes, Who is this please?
Salesman: I’m from the Prudential Life Insurance Corporation. I understand you just had a new baby.
Mrs. Hunt: Yes.
Salesman: What was it? A boy or a girl?
Mrs. Hunt: A boy.
Salesman: So much the better
Mrs. Hunt: (She is silent. She’s into Women’s Liberation.)
Salesman: (giggles nervously) I guess his dad looks at it that way.
Mrs. Hunt: (Silent again)
The salesman laughs foolishly again and launches into his pitch.

In many places in the world (and some would would add with MeToo Movement in the US as well) this statement still holds true. Yet, undeniably, Our Bodies, Ourselves has had an impact. Our Bodies, Ourselves has been updated over the years and translated into hundreds of different languages. Almost five million copies in English have been sold. It has been the target of censorship in the US; librarians had their jobs threatened in many communities. Yet it has also been honored and recognized by Time Magazine, The Library Journal and The Library of Congress, among others. And the women who started it all are still around, still working to improve the lives of women worldwide.