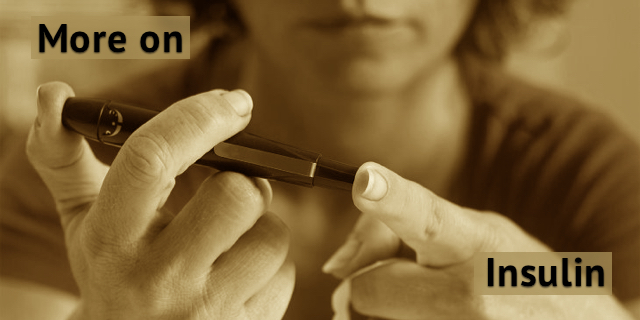 Insulin was first extracted from cattle and pig pancreas.  It took 8,000 pounds of pancreas from 23,500 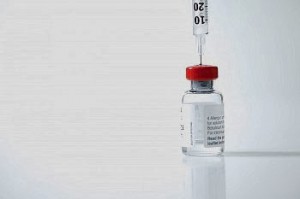 animals to make one pound of insulin. In 1978, Eli Lilly needed 56 million animals to meet the US demand for insulin.

Everything changed when, Genentech used recombinant DNA technology to create synthetic human insulin (now called human insulin). The process involves placing the human gene that creates insulin in a plasmid loop of bacteria DNA.  This is placed in bacteria. The bacterium are placed in a vat and allowed to ferment to create insulin and finally, the insulin is purified.

In 1982, the FDA approved synthetic human insulin.  Eli Lilly was marketing it under the name Humulin by 1983.

Though synthetic human insulin is chemically identical to natural insulin, it has several drawbacks.  When it is injected under the skin it clumps. This clumping affects absorption. 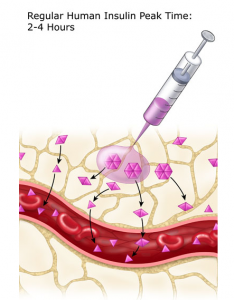 These drawbacks led to the production of analogs. In a process similar to the one Genentech used, researchers create an insulin that is altered slightly to maximize absorption, distribution, metabolism and excretion. In 1996, Eli Lilly produced the first insulin analog called Humolog.

Insulin helps the cells of your body absorb glucose from the blood. The goal of insulin replacement therapy is to simulate what a healthy pancreas does.

How does a health pancreas work?  A healthy pancreas maintains blood sugars overnight and between meals between 60-100mg/dl. After meals or snacks, it keeps blood sugar at 140 mg/dl or less. It does this by continuously releasing low levels of insulin all the time and large bursts of insulin at mealtimes.

Insulin released from the pancreas into the blood stream affects cells for about 1 ½ hours. Insulin also stimulates the liver to store glucose as glycogen in both the liver and in muscles.

Cells of the brain and heart are in constant need of glucose. If the blood glucose levels drop too low signals are sent to the pancreas to release another chemical called glucagon. Glucagon acts on the liver to turn glycogen back into glucose. Glucagon also starts the break down of proteins and stored fat into glucose.

When fat is converted to glucose, ketones are released into the blood causing the blood to become acidic. Blood sugar rises and the extra glucose ends up in the urine. Excessive urination occurs with a loss of potassium and other salts. Dehydration results.

For someone with insulin-dependent diabetes, skipping meals or taking less insulin (as when people feel forced to ration their insulin because of its high price see  What’s Going On With the Price of Insulin #Insulin4All), diabetic ketoacidosis (DKA) can occur.  In My Brother Died of DKA, Katie Leslie shares how her brother died from this severe, life-threatening complication.

Insulins are classified by how quickly they start to act, when they have their greatest effect after they are injected and how long they act in the body. The background insulin that people with insulin-dependent diabetes use is called basal insulin.  For insulin replacement therapy, people with diabetes must inject long-acting insulin once or twice per day. Insulin glargine, insulin detmir (analogs) and NPH Human insulin are three long acting insulins on the market. They last between 12 and 24 hours.

A healthy pancreas releases high amounts of insulin at mealtimes. Mirroring that activity in insulin replacement therapy means injecting insulin before you eat to deal with the carbohydrates that are in a meal. Bolus insulin is also used if your blood sugar gets too high-this is called a correction bolus. Bolus insulin is usually rapid acting insulin analogs like insulin aspart, insulin lyspro, insulin glulisine or regular insulin. Insulin aspart, insulin lyspro, insulin glulisine take effect within  5 to 15 minutes of being injected and they last between 4 and 6 hours.  Synthetic human insulin takes 1/2 hour to 1 hour to take effect so you have to wait before eating and the duration of action is 6 to 8 hours.

People who use insulin pumps need rapid acting insulin analogs which is constantly being infused under the skin.

For bolus insulin you have to figure out the number of grams of carbohydrate that 1 unit of insulin will remove from the bloodstream. Usually 1 unit of rapid acting insulin works on between 12 and 15 grams of carbohydrates. Unfortunately stress, physical activity, time of day and a number of factors can impact how sensitive the body’s cells are to insulin. Illness can also impact the amount of insulin that is needed by the body. See our post 5 Things You Need to Know About Insulin-Dependent Diabetes and Illness

Figuring out Carbs and Insulin 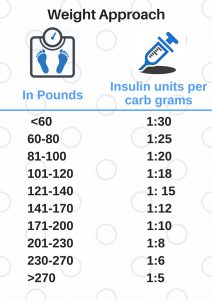 Both Carbohydrates:  Why We Love Carb Counting (and You Should Too) and Be Confident! Face Carb Counting Positively! provide useful information on figuring out how many carbs are in the food that you eat. After you have determined this, you have to come up with the amount of insulin you need per meal. This is based on your insulin/carbohydrate ratio.

One way to figure this out is the Weight Approach. This method is based on the observation that insulin sensitivity decreases as weight increases.

It is recommended that you use this I:C ratio as a beginning and test it out over the course of 10 to 14 days, keeping a record of your blood sugar before each meal and then take a reading 3 to 4 hours after.

So this is a very short introduction to the very complicated lives of people with type 1 diabetes or insulin-dependent type 2 diabetes.  The price of all the equipment needed to live with type 1 diabetes-syringes or pens, test strips, urine tests, insulin have been rising.  We’d like to hear how people who are multi-tasking to stay alive are coping.  Please comment and let us know.