What’s going on with the price of Insulin? - Medivizor
SIGN IN

Navigation Menu
Home » Blog » What’s going on with the price of Insulin?

What’s going on with the price of Insulin? 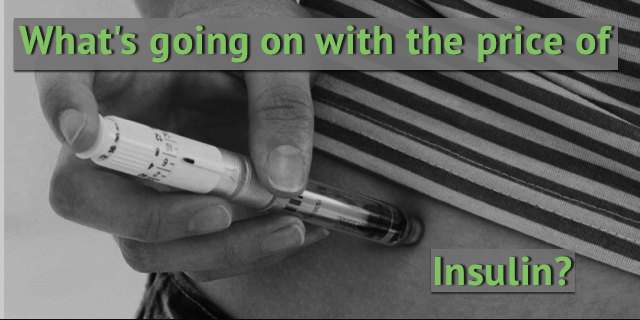 And the prices of other medications in the US

Type 1 diabetes is an autoimmune disease. That means that the person’s immune system attacks and destroys the cells in the pancreas (beta cells) that make insulin. Once those cells are destroyed, they don’t grow back.

Type 1 diabetes is usually diagnosed in young people, before the age of 30, and most often is diagnosed in children between 10 and 14 years of age. It runs in families but can happen to anyone. Around 10% of people with diabetes have Type 1. 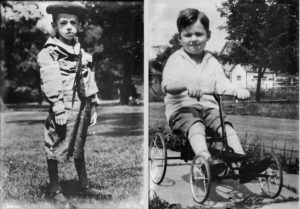 Before 1922, the only treatment for people diagnosed with type 1 diabetes was an extremely low calorie diet—as low as 400 calories a day. The treatment extended life but often resulted in death by starvation.

Then in 1920, a physician named Frederick Banting pitched the idea of isolating the secretions of the islets of Langerhansin the pancreas to John Macleod, Canada’s leading researcher of diabetes at the University of Toronto. Years later, Banting wrote,”I told him [John Macleod] that I had given up everything I had in the world to do the research, and that I was going to do it, and that if he did not provide what I asked I would go some place where they would.”

The story goes that Mcleod gave Banting a lab with “minimum equipment,” the summer, 10 dogs and an assistant, Charles Best. By summer’s end, the two men had isolated “isletin” and reversed the effects of diabetes in dogs. Their experiments convinced Macleod to add personnel, specifically a biochemist named Bertram Collip, and money. By January 1922, insulin had saved the life of a 14-year old boy, Leonard Thompson.

In May 1922, Eli Lilly received exclusive rights to manufacture insulin in the US for a year. Connaught Anti-toxin Company had the rights for production in Canada. Clinical trials were started in Boston and Chicago using Lilly’s extract in July. 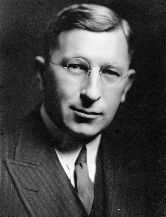 In 1923, Banting and Macleod received the Nobel Prize in Medicine. Banting shared his prize money with Best, while Macleod shared his with Collip. To assure that insulin would be available to everyone who needed it, Banting, Best, Macleod and Collip sold their patents to the University of Toronto for $1 each. When asked why he gave away his patent, Banting replied, “Insulin does not belong to me.  It belongs to the world.“

Fast-forward to 2016 when the American Diabetes Association started a campaign called “Stand Up For Affordable Insulin” and asked people to share how the high cost of insulin has impacted their lives. Here are some of their comments:

“One of my biggest fears is that someday when my son is on his own that he won’t be able to afford the insulin needed to keep him alive. How will our children do it? As parents of a child with type 1 we have enough to worry about every minute of every day let alone how they will afford to survive someday.”

“At times, I will starve to reduce my insulin needs to ensure I have enough insulin for my child.”

“Insulin is not a luxury drug. It’s not optional. It’s something we need, and the prices just keep going up. There’s a lot of support in the diabetes community, but at the end of the day you’re still the one living with it and it’s your life that’s at stake. That’s scary.” 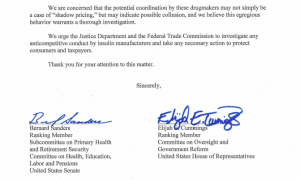 In November 2016 Senator Bernie Sanders and Rep. Elijah Cummings wrote to the Justice Department and the Federal Trade Commission to investigate insulin manufacturers for anti-competitive conduct or collusion.

It makes no sense that the same drug that costs $70 in France costs $450 in the US. We should reduce barriers to importation of drugs. pic.twitter.com/h3MzOSCI7g

The problem has not gone away. Contrary to the desires of those who discovered it, people with type 1 diabetes are dying due its cost. A January 22, 2018 article published in The Harvard Political Review’s highlighted Alec Raeshawn Smith’s story. Alec was diagnosed at age 24 with type 1 diabetes.  Two years later (May 2017) he aged out of his parents’ insurance. The least expensive insurance that he and his mother could find was around $450 per month with a $7600 deductible. Alec couldn’t afford the deductible so he went off of health insurance. Alec’s mother, Nicole Smith-Holt wrote in “I Had To Bury My 26-Year-Old Son Because He Couldn’t Afford Insulin” “That deductible meant he would be paying out-of-pocket for his medicine for many months anyway, so he decided to go without the plan until he could find a different job with benefits.”

In June, he went to pick up his insulin at the pharmacy. Faced with $1300 bill, he decided to ration his insulin until he got paid.  The last time Alec was seen was June 25, when Alec had dinner with his girlfriend, on the 26th he called in sick to work. He was found dead in his apartment on June 27.

Three companies hold patents on manufacturing insulin in the US: Eli Lilly, Sanofi and Novo Nordisk and their profits were more than $12 billion in 2014, much of it from the sale of insulin. 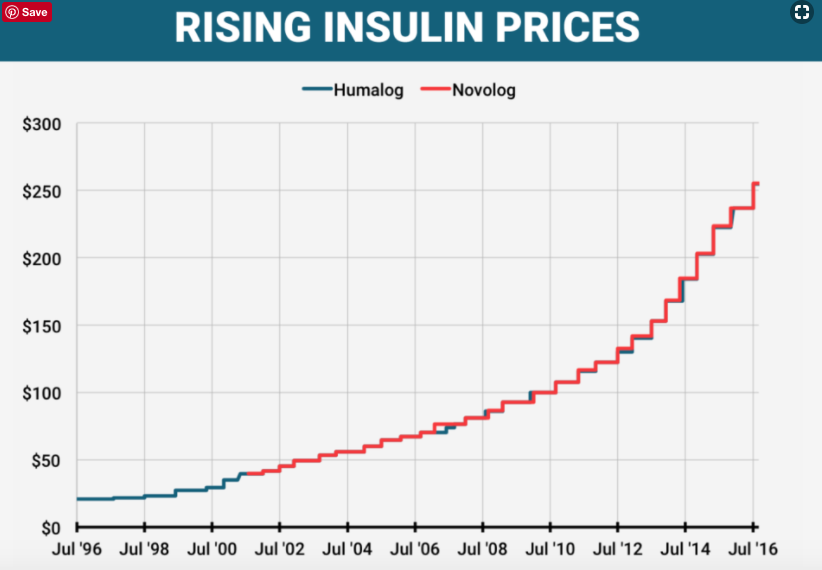 A class action lawsuit has been filed against these three companies, criminal investigation into collusion are also in the works. But there are other players in this convoluted story.  Follow the money to pharmacy benefit managers and insurance companies.

Pharmacy Benefit Managers are middle men who are supposed to negotiate discounts and rebates and create the “formulary,” the list of medications covered by insurance plans.  Express Scripts,  CVS Health and United Health/OptumRx are the three largest.  Business is booming for these intermediaries: they bring in $200 billion per year.

PBMs negotiate discounts and rebates from manufacturers. Patients in health insurance plans, almost 30% in high deductible plans, pay full price for insulin  until their deductible is reached. After the negotiated amount of time, the manufacturer pays the PBM the rebate.  The PBM takes a cut of 10% and the rest of the rebate goes to the insurer who is supposed to pass on the rebate to the patients.

In the four meetings held by the US Senate 2017 H.E.L.P. Committee last year,  the Committee skirted the issue of what is happening: No one is watching the insurers to be certain that rebates are passed on to patients.

In fact, the net prices paid by insurance companies are increasing at a slower rate than what consumers without insurance (or those who haven’t reached their deductible) are paying out of pocket at the pharmacy, according to figures collected by  IQVIA Institute of Human Data Science.

These three groups, manufacturers, pharmacy benefit managers and insurers, are all blaming each other for the high prices, obscuring the truth.

Here is an illustration by the American Diabetes Association of the convoluted system that has grown between insurers, manufacturers and PBMs. 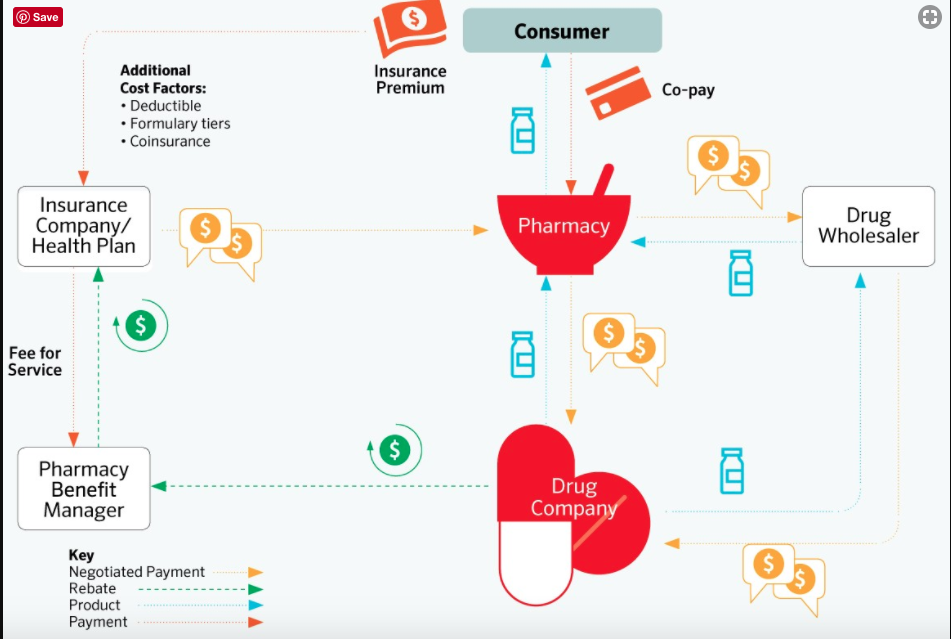 An article by the Union of Concerned Scientists points out that the appointment of Alex Azar as Secretary of Health and Human Services could be problematic for reducing the costs of insulin.  After all, Azar left Eli Lilly for his new job in the Trump Cabinet.  Starting at Lilly in 2007 (after working in HHS in the Bush administration,) he rose to be president of the US arm of the company.  He also served on the board of directors of BIO, a drug lobby. During his tenure (since 2011), the prices of Humalog and Humulin rose 225%.

Since the Federal government is slow to action, several states have started to implement transparency laws and other measures to stop price gouging or monitor PBMs.  The National Academy for State Health Policy is keeping up with the legislation that is being passed to deal with high drug prices. Check out the interactive maps.

The high prices of insulin affects people with type 1 diabetes worldwide.   Half of those who need it can’t get it. In the US, there are 6 million people that need insulin to live.  #Insulin4all is about bringing this to light.

Alec Smith was one of those Americans.  Holt-Smith wrote of her son,

“my Alec was the best son anyone could ask for. He was loved by so many and I am so proud to have been his mom for the short 26 years I had with him. But he should still be here. I should not have buried my son at 26 because he couldn’t afford the one thing in life that was created to keep him alive.”

Will ethics and morality win-out? When making a living means short-changing others of their lives, will courage prevail?  The posting of a former pharmaceutical sales representative may provide a glimmer of hope.

“I felt like Lex Luthor…Took a huge step today and quit my job. 8+ years working in the Pharmaceutical industry was soul-crushing and put me in very bad health, mentally and physically. I feel 100 lbs lighter.

No offense to my pharma cohorts but everyday I felt more unethical and immoral working for an industry that capitalizes on the health of all of us. My company raised the price of insulin 3 times in the past year and a half. Why? No reason except more profit. I saw people, mostly elderly, who could not afford their insulin because the price kept going higher and higher.

It really hit me hard when an elderly woman walked up to me in a doctor’s office, crying. She saw my name tag and my product, which was insulin. She told me her husband was on a high dose of insulin but he had hit the Medicare “Donut Hole” and could no longer afford his insulin. She tried everything from applying for my company’s assistance program to using nothing but samples we provide to the doctor. She begged me to do something. All I could say was that I was sorry and there was nothing I could do for her. She asked me why the price went up on my product and I told her I didn’t know. She started to sob and walked away. I walked out of the office and to my car and I started to cry myself. I’ve never felt so helpless.

What do you do when your job actually keeps people from living? It’s a terrible, greedy industry. I’m sorry for working for an industry that profits from your diseases and I’m sorry for adding to the hardship and frustration of preventing you from getting the treatment you need.

If you don’t think universal healthcare is an answer, work in pharmaceuticals for a DAY and you will change your mind.”

This is a hard thing to talk about but it is a discussion we need to have as a society. What do you think?