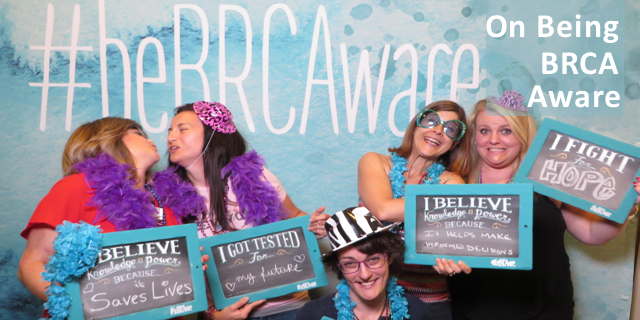 In 2013, Angelina Jolie described her experience of being diagnosed with one of the BRCA mutations in her New York Times OpEd and prophylactic surgeries. 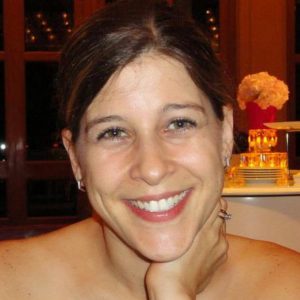 But, five years before AJ’s “coming out,” Karen Malkin Lazarovitz @karenBRCAMTL learned she had one of the BRCA mutations.

There are genes in our cells that suppress cancer. These tumor suppressor genes** put the brakes on cells, making sure that they do not divide uncontrollably. Two of these genes are BRCA1 and BRCA2. Here is a video showing what happens in the cell.

Here is the first part of an interview with Karen describing her BRCA journey.

What made your father decide to be tested for the BRCA mutation?

My father’s first cousin was diagnosed with ovarian cancer. She tested positive for the BRCA2 mutation and decided to go in for a prophylactic hysterectomy and oophorectomy. When they went to do surgery, they found ovarian cancer. She immediately got in touch with my father and told him about the mutation. He booked an appointment with the genetics department at our hospital, met with a genetic counselor and decided to get tested as well.

Have other members of your family had breast cancer or ovarian cancer or both?

What is the process of getting tested? How do you go about it? 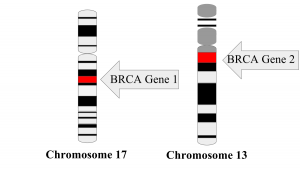 In Montreal, once you have an immediate family member that is positive for a mutation, you call the genetics department of the hospital. In my case, it is the cancer prevention centre of the Jewish General Hospital. Before any testing is done, you meet with a genetic counselor (which is absolutely necessary). They explain more about your family history, based on what you have provided them with and talk about what it means if you are positive or negative. Once you have spoken with them, you then decide if you want to get tested. It is a simple blood test. Once taken, it is sent off to a lab that is able to process the information. At the time, 8 years ago, mine was sent to Myriad genetics. I would suggest you try and use a lab that will share your data, as Myriad does not do that.

Karen received the news that she too was positive for BRCA mutations. Because of her family history, her chance of getting breast cancer was 87%. Her chances of developing ovarian cancer were also increased. With that in mind, Karen decided to have a double mastectomy, hysterectomy and oophorectomy.

What were your husband’s feelings about your decision?

My husband supported me 100% and agreed with my decision. He loves me the way I am and only wants me to be healthy. For him, it was never a decision. Eighty-seven percent chance of breast cancer to him (as to me) was just a matter of when,  not if.  Same with the hysterectomy and oophorectomy. He was and will always be my biggest supporter.

You have said you had  trouble finding support for your decision when you decided to have your surgeries. Can you describe what happened?

Eight years ago, when I found out about my mutation, not many people were talking about prophylactic surgeries. Many doctors told me I was being extreme, ridiculous or making it a bigger deal than it was. I had people tell me to change my diet and exercise. The lack of knowledge was unbelievable. I had to search to try and find others who were dealing with the same decisions that I was. It took me quite a while to find them and when I did, I finally didn’t feel alone. They got where I was coming from. A network of support is crucial when dealing with any life changing decisions.

You started an online support group. Can you describe it and how it evolved?

I knew that I needed some kind of support.   As soon as I found out I was positive, I started searching for others who had been in similar situations. I found it extremely difficult to find anyone.

Then I met Teri Smieja.  We thought that an online support group would be a great idea. It would connect other mutation carriers and allow us to share our fears, concerns and stories with each other.

We decided to start the BRCA Sisterhood on Facebook and make it private so that no one would see what we were discussing.  I personally screen every request to make sure that the women requesting are legit. We have made sure that the support group focuses on the issues and nothing more. We do not allow any religion or political talk and we don’t allow medical advice.

The group is there to offer support, advice and friendship. It has been in existence for over 7 years now. We have over 8000 women from all over the world and we’re growing daily. Talking to others who “get” what you are going through allows you to not feel alone. The love and support in this group is amazing.  I get emails daily expressing how grateful these women are to not feel alone. 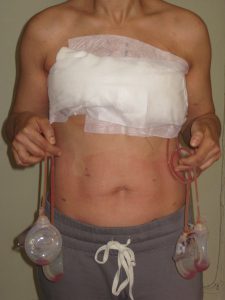 The support Karen received, and continues to receive, has been critical as she continued her journey through her surgeries.  Karen’s story continues in another posting later this week.

***For more on learning your family health history, read Why Knowing If Your Cousin Had Cancer Could Save Your Life: Genetics.