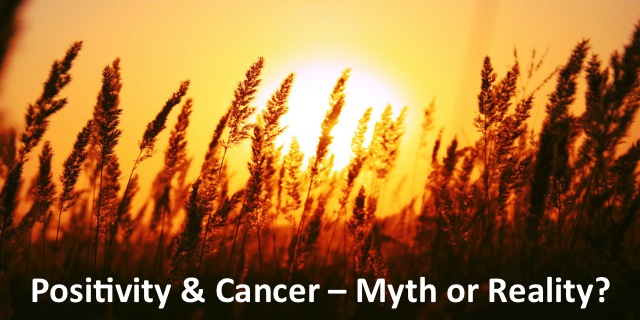 Called the “Emperor of All Maladies.” there’s little doubt that a cancer diagnosis throws life completely out of control.  Unfortunately, this chaos creates vulnerabilities that can and have been exploited.  It is tempting to believe the idea that if you control your thoughts and make them positive, you can control cancer. However research doesn’t support this myth!

Contrary to what you have heard in the media, there is no scientific evidence supporting the popular myth that positive thinking or a “positive attitude” cures, slows the progression of, or extends the life of people diagnosed with cancer.

Research On Positive Thinking And Cancer

This “positive psychology” premise has been studied.  For example, in 2004 a study compared survival rates of lung cancer patients.  These patients completed a survey of optimism before and after participating in a clinical trial.  Penelope Schofield, lead researcher states,

Likewise in a 2007 study of 1000 people with head and neck cancers, the researchers found “no support for the hypothesis that negative emotional well-being predicts poorer survival.” psychology including that a “fighting spirit” will slow cancer and extend life.

It is difficult to find discussion of cancer in the media that doesn’t use terms like “fighting” cancer or “winning (or losing) the battle.”  The “Fighting Spirit” in positive psychology research takes the view that cancer is a challenge to be overcome.

One study looked at 578 women diagnosed with stage I or stage II breast cancer who were assessed on “fighting spirit” at between 4 and 12 weeks post diagnosis.  Five and 10 years later, their health status was evaluated.  The research author wrote,

“The data confirm that there is no benefit to survival of a fighting spirit beyond 5 years post-diagnosis. This is an important result as it may help to remove any continuing feelings of guilt or sense of blame for breast cancer relapse from those women who worry because they cannot always maintain a fighting spirit or a positive attitude.”

Scientific research supporting the idea that positive thinking boosts the immune system is also difficult to find.   Neither standardized definitions nor scales exist to measure the impact of  “finding benefit” from one’s cancer and prolonged survival of cancer.

The American Cancer Society starts their rebuttal of the positive thinking myth with the question of a woman with cancer:

“Is having a positive attitude important in fighting the cancer? My friends say it is, but I feel sad and discouraged.”

As the American Cancer Society responds:

“In recent years, much attention has been paid to the importance of having a positive attitude. Some people go so far as to suggest that such an attitude will stop the cancer from growing or prevent death. Patients are even told that they will never beat the cancer if they don’t stop feeling sad, bad, depressed, or other so-called ‘negative’ feelings. This kind of message is destructive to people who are dealing with cancer and recurrence. They are fighting for their lives and then are told they are responsible for causing their own illness. And, to make matters worse, they may feel as if they aren’t supposed to grieve or feel sad over the new hardships and major changes in their lives. Please do not allow others’ misguided attempts to encourage positive thinking to place the burden of your cancer on you. That is not accurate, and it’s not fair to you.”

Fear drives the continuation of this myth. Fear of chronic disease and fear of cancer perpetuates this problem in our society.  The result is enforced silence.

Exposure to this myth may lead people whose cancer is not responding to treatment to feel as though it is their fault.  Nothing could be further from the truth. “Breast cancer…gave me, …a very personal, agonizing encounter with an ideological force in American culture that I had not been aware of before – one that encourages us to deny reality, submit cheerfully to misfortune and blame only ourselves for our fate.”

The Importance of Allowing and Sharing Real Feelings

Communicating sadness, distress or fear of the unknown is healthy, positive behavior.  Tori Tomalia, a mother of three living with stage 4 lung cancer wrote about the “positive thinking” encumbrance.  In her post she reminds us that children play to work out fears.  Imagine a group of five year olds…

The little girls, holding their baby dolls, scrambled onto the sofa.  “Lift you feet” one girl says, “the flood is coming.” They scream and raise their feet.  “Do you hear that sound?  It’s the wind…a tornado.” More cries of fear issue from the girls as they hold tight to their dolls.

This vignette is an example of a type of playing called ‘dramatic play.’ An important part of cognitive and emotional development, children actually play out negative, difficult and sometimes terrible fears.  By playing out the uncertainties of life, they are able to face and take control of terrors. Being with that which is scary is healing.

Fortunately children are not chided as “negative” for this kind of play.

Tori starts her post, “I may get some static for this post, but I think that there is too much pressure on cancer patients to stay upbeat and cheerful all the time, dancing through treatments and smiling during scans.”

Adults with serious chronic diseases are being told they brought their conditions on themselves through “negativity.”  It is time to challenge this hogwash for what it truly is: victim-blaming and transferring fear.

This post is not about raining on your parade or crushing hope.  It is about removing the millstone of “positivity” from people who have cancer.  Since there is research that stress impacts health, perhaps eliminating the burden of always being positive will reduce stress.  Let’s hope so. Because, no matter how you feel—negative, positive or in between–it is healthy and positive just to feel it!