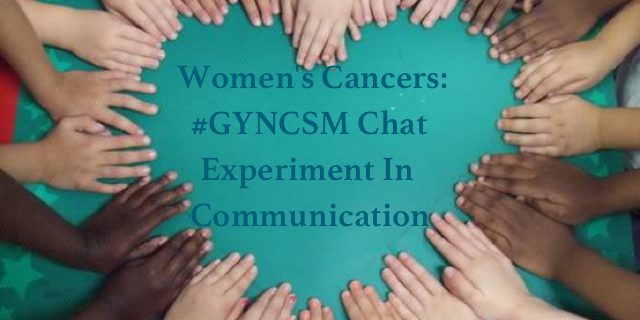 The majority of Gynecological cancers–Ovarian, Uterine/Endometrial, Cervical, Fallopian tube, GTD (Gestational Trophoblastic Disease), Vaginal and Vulvar–are considered rare.  Even so, through social media, women who have experienced these cancers have found each other.  One opportunity to connect is a Twitter chat called #GYNCSM.  It meets on the second Wednesday of the month at 9pm ET.

Communications around cancer between physician and patient can be challenging . First, communicating effectively in crisis is difficult.  The messenger must try to remain calm; the receiver is in shock and may not understand the message.  Add in the medical jargon and no wonder physicians and patients aren’t on the same page.

“That happened to me too” was a phrase repeatedly stated during the #GYNCSM chat on March 11, 2015–that says to ask if a problem is systemic.  Here are three insights into areas where communication breakdowns occurred between gynecological cancer patient and physician.

Several women had this to say:

#gyncsm T1. no one told me fertility options prior to hysterectomy.

@BRCAresponder Same here. Before I even really understood I was left with a full hysterectomy in my 20′s #gyncsm — Ms. Loren/Petrillo (@CookiFIT) March 12, 2015

“@BRCAresponder: #gyncsm T1. no one told me fertility options prior to hysterectomy.” Fertility is one of the most important things to me rn — Katelyn McKinley (@Big_Dreams03) March 12, 2015

Assuming that women understand their bodies or  that they would not be able to afford infertility treatment is unacceptable.  Suffice it to say, when a person hears the word “cancer” it can interfere with hearing all the details of the treatment but it does seem odd that the words “You will never be able to have a baby” would not filter through the fog.  It seems that some of these women were not properly educated or prepared for this loss.  Nor were options to save their opportunity to procreate discussed.

In 2013, The American Society of Clinical Oncology provided a Clinical Update based on a review of research.  In it they urge physicians to provide information on the impact of treatment on fertility and to advise patients on fertility preservation.

During the chat, several women described how they were ill-prepared for surgical menopause.

I’ll start: T1 No one ever told me what instant menopause would be like – much more than hot flashes. Ugh #gyncsm — Women of Teal (@womenofteal) March 12, 2015

Areas Where Lack of Aftercare Impacted Quality of Life

Impact of Radiation on Other Organs

T1A #gyncsm No one ever told me… The effects of radiation would wreak long term havoc on my intestines. — Ms. Loren/Petrillo (@CookiFIT) March 12, 2015

One of the medical oncologists let these women know that they should have been told about these side effects.  Then Dr. Matthew Katz, a radiation oncologist who was participating provided this guidance to these women.

T2 I wish someone told me how much pain scar tissue in abdomen could cause. Worried pain was cancer . #gyncsm — Women of Teal (@womenofteal) March 12, 2015

Two healthcare professionals support the importance of care after treatment and believe there is a real need for aftercare plans.

@PelvicGuru1 @womenofteal T2A. Definitely. The focus has to be on cure, but can start planning aftercare as treatment starts #gyncsm — Matthew Katz (@subatomicdoc) March 12, 2015

One of the questions during the chat asked the healthcare professionals what surprised them while treating patients. One oncologist stated

@DrMarkham I don’t think we realize there is support out there. It’s such a shock and we feel alone and isolated. I know I did! #gyncsm — Katelyn McKinley (@Big_Dreams03) March 12, 2015

No one ever told me that anxiety & depression accompanies waiting for the day the doc says my fertility window is closed. #gyncsm — Katelyn McKinley (@Big_Dreams03) March 12, 2015

T1 #gyncsm no one told me about #scanxiety or what it would be like to watch others suffer, especially some young enough to be your kid — AliveAndKickn (@AliveAndKicknDD) March 12, 2015

Many of these women have suffered in silence. Partly this has to do with societal stigma of cancers of the reproductive organs.  In a 2002 study of communication about sexual function between physicians and nurses with women who have had gynecological cancer, most healthcare providers believed their patients would experience sexual dysfunction. Yet only one-fourth of the physicians and one-fifth of the nurses discussed this fact with their patients. Reasons given included “it’s not my responsibility” “embarrassment” “lack of knowledge or experience” and “lack of resources to provide support.” A 2012 review of the literature found that women who have experienced gynecological cancers have many sexual concerns but that physical issues were more likely to be studied than psychological and social issues. A 2012  study compared the quality of life for young women and women age 40 and up.   The younger women scored lower on quality of life scales, including poor body image and negative impacts on their employment status.

One purpose of this chat is to share resources and support.  Here are a few that were discussed.

One of the participants in the chat is a pelvic physical therapist.  Her tweets illustrate the lack of appropriate communication between physician and patient with regard to aftercare and quality of life.

@womenofteal No one told an Onc/GYN to stop telling patients “just have your husband push himself inside of you to break scarring” #gyncsm — Tracy Sher MPT, CSCS (@PelvicGuru1) March 12, 2015

@womenofteal No one tells patients how to feel sexy after treatment. One doc said to patient “just be happy your survived” #gyncsm — Tracy Sher MPT, CSCS (@PelvicGuru1) March 12, 2015

This website is a source of information for both healthcare providers and women going through menopause. There is a directory of Certified Menopause Experts throughout the US. There is even a free mobile app called MenoPro that helps women and their clinicians personalize their treatment menopausal symptoms.

This app was also recommended by a survivor to help gynecological cancer patients (and other cancer patients) with creating questions to ask your physician and allows recording of their answers. It has a tool to up keep with medications and a symptom tracker as well as a repository of Cancer.net videos, podcasts and articles which is updated automatically.

Participants recommended the #GYNCSM websiteas a resource. In previous chats, participants have shared valuable information that has helped them cope with the experience of a gynecological cancer diagnosis.

Where To Go From Here?

Sharing personal stories in a chat with clinician moderation and participation is a crucial first step to change. The status quo can best be summed up in these final tweets.

you don’t just flip a switch and integrate into what life ‘was’ for you prior to ca dx, it’s complicated #gyncsm — Gail Rose (@rose_mzrozee) March 12, 2015

As Dr. Boulay so eloquently put it

T1. Nobody ever told more I would learn more from my patients than they would learn from me. #gyncsm