Should CAR-T be used earlier for NHL patients? - Medivizor
SIGN IN

Should CAR-T be used earlier for NHL patients? 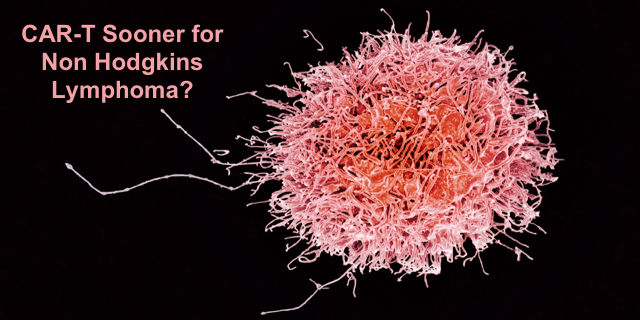 CAR-T therapy is a relatively new immunotherapy treatment for advanced B-cell lymphomas, including non-Hodgkin’s lymphoma (NHL).  It is usually reserved for patients who have had more than one previous line of treatment but relapsed anyway. The standard course of treatment for non-Hodgkin’s lymphoma is chemotherapy, which cures about 70% of patients. For the other 30% whose cancer does not respond or relapses, the second line treatment is generally salvage chemotherapy. About half of those patients respond, but salvage chemotherapy alone usually does not lead to long-lasting remission. [1]

If the patient responds well to the second-line therapy, but then relapses, they may be a candidate for a stem cell transfer. However, based on the results of three recent clinical trials, medical experts are wondering if CAR-T therapy should move up to be the second-line treatment for NHL. [1]

What is CAR-T therapy?

CAR-T therapy involves harvesting immune system cells, called T cells, from the patient’s blood, and modifying them genetically. T cells identify and kill bacteria, viruses, other microorganisms, and cancer cells. Cancer cells, however, develop self-defense characteristics to evade and turn off T cells. Unlike the patient’s natural T cells, modified CAR-T cells can recognize the proteins on the surface of that patient’s cancer cells and identify them for attack. [2][3] 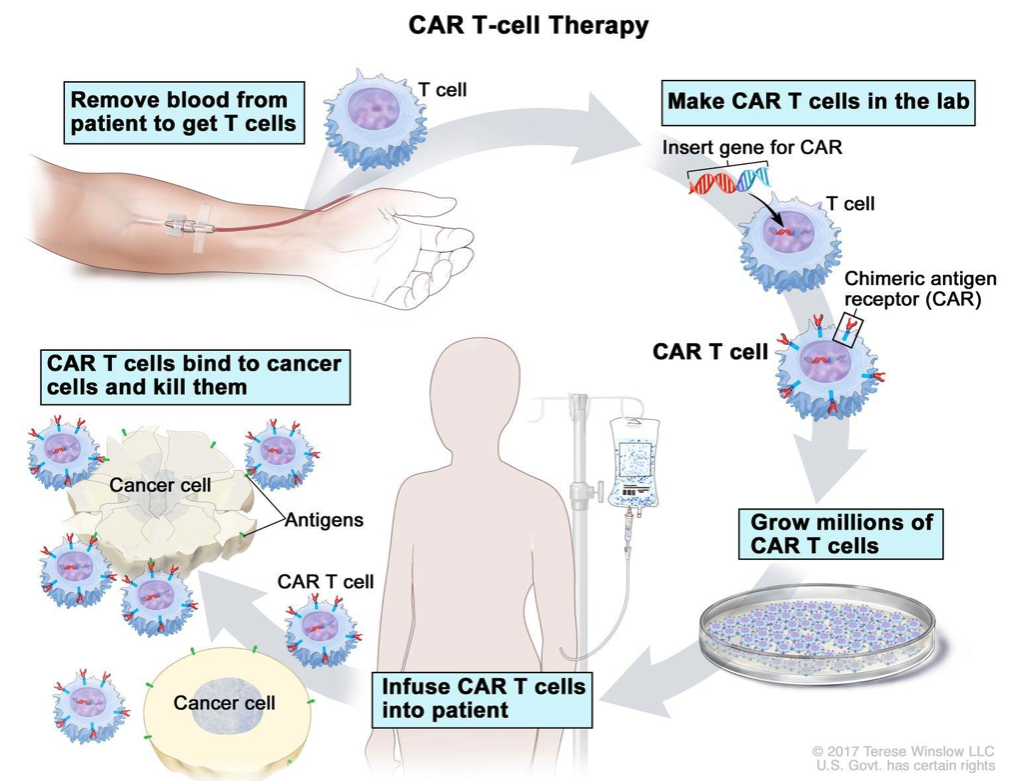 Should CAR-T be used earlier?

More patients with refractory/relapsed NHL receive CAR-T therapy than before, but now researchers want to determine if using CAR-T earlier in a patient’s treatment would yield better outcomes than courses of chemo, salvage chemo, and stem cell transplant.

Recently, three different clinical studies compared CAR-T therapies as a second line treatment with standard treatment for NHL. In these Phase 3 clinical trials, all the people in the test groups relapsed after chemotherapy. In the ZUMA-7 and TRANSFORM trials, patients receiving CAR-T therapy after initial treatment had longer periods of event-free survival. They also had a higher percentage of complete response (eradication of cancer) than those receiving the standard of care. In the other trial, BELINDA, the two test groups had comparable periods of event-free survival and complete response.[1]

There were important differences among these three trials. First, each trial used a different kind of CAR-T treatment. Second, the trials had different qualifications for patients with bridge therapy. Bridge therapy is chemo that’s intended to keep the patient stable while the CAR-T cells are grown in the lab. With some patients having none at all, only one, or, in the BELINDA study, some patients having more than one round, it’s unclear how the different treatments impact the results.

Given that the CAR-T patient groups started at differing treatment points, it’s inaccurate to compare the results of the trials against one another. However, the results are exciting because the CAR-T patients in two of the three studies had longer event-free survival and complete response. In the third, while the event-free periods of survival were equivalent between standard and CAR-T therapies, some of the patients had waited longer before getting the therapy.

There are problems with CAR-T therapies, one of which is the cost. CAR-T is individually engineered, takes weeks, and is very expensive (one of the most recently approved therapies costs over $450,000). Another issue is that some people don’t respond to it, or the response is short-lived. Studies suggest that constant exposure to the cancer causes T cell exhaustion, and the CAR-T cells don’t proliferate. What genetic factors lead to exhaustion? Can we manipulate them? [3][4]

What is the future for CAR-T and NHL?

A new study using single-cell RNA and protein sequencing data examined genetic changes of the T cells several times after infusion to see how the cells become exhausted. The research found an uptick in the presence of a checkpoint receptor called TIGIT (T cell immunoreceptor with Ig and ITIM domains). TIGIT was a clear marker of T cell dysfunction.  Theorizing that TIGIT expression might be “driving poor response in NHL patients,” the researchers performed an experiment that suggests that a TIGIT-blocking antigen could improve the results of treatment. More work needs to be done on preventing CAR- T cell exhaustion. TIGIT appears to be a promising target.[5][6]

CAR-T offers hope to those who have refractory NHL for those who can afford it, but CAR-T doesn’t work consistently. More research at the genetic level could identify the factors leading to poor outcomes and guide solutions. Cancer researchers are looking at using CAR-T to fight solid tumors as well.  From past successes we can confidently say that new cancer-fighting technologies will be discovered as we fine-tune our knowledge of how NHL functions genetically.