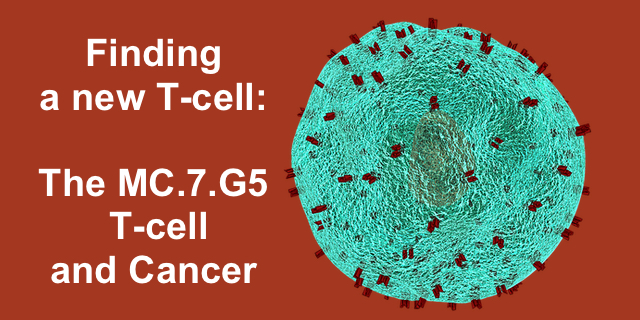 Something unusual happened when Professor Andrew Sewell and the T-Cell Modulation Group at the University of Cardiff put the blood of a healthy donor in a petri dish with some cancer cells. What grew in the blood was a T-cell that no one had seen before. This T-cell attacked the cancer cells and destroyed them.

Sewell and his team did what all bench scientists do…they started experiments to see what was happening. And they used a newer strategy to do their experimenting: genome-wide screens using CRISPR.

We discussed CRISPR in a blog post by that name in 2019. It is a way of editing DNA. Here is an explanatory video created by Mayo Clinic.

Using CRISPR allowed Sewell’s group to discover what the new T-cell called MC.7.G5 was targeting on the cancer cells. What they found out was that this new T-cell targeted a common protein on the surface of everyone’s cells called MR1. Here is a video that shows how T-cells target proteins on cell surfaces.

In the lab, the team found that this T-cell killed a wide variety of cancer cells. They tested it against lung, melanoma, leukemia, colon, breast, prostate, bone and ovarian cell lines that had no common protein features (HLAs) other than MR1. They also tested in the lab newer cancer cells from patients with ovarian cancer and melanoma. The MC.7.G5 T-cells took all of these cancers on.

This is just the beginning of the research that has to be done but this is a promising development in cancer research. A biotech company in London called Ervaxx is partnering with Dr. Sewell’s group to bring this discovery to patients.

Here is a video on tumor immunology and immunotherapy by Nature.

Image by allinonemovie on Pixabay