To Treat or Not To Treat Cancer: Medical Decision-making
SIGN IN

Navigation Menu
Home » Blog » To Treat or Not To Treat Cancer: Medical Decision-making

To Treat or Not To Treat Cancer: Medical Decision-making 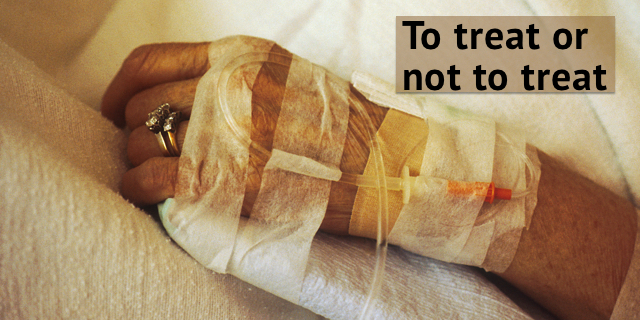 Cherry Hughes** is an active, energetic 75 year old, still working in the marketing and public relations profession in Great Britain.  Her life is filled with friends and fun.  “I love cooking and eating out.  I am 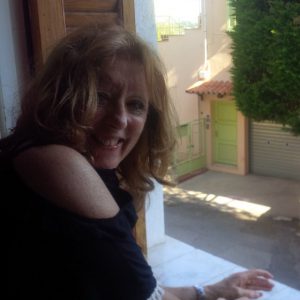 deeply interested in politics.  I love music …I go to jazz clubs.  I love going to France …I have a little apartment there.”

But at 73, she found a small lump near the nipple of her right breast. By June 2016, surgery removed a 30 mm mass, 20 mm of which was poorly differentiated.  Three of the five lymph nodes they removed were positive for cancer. Her pathology report had one “bright” spot-her tumor was HER2 positive so she could be treated with Herceptin.

“Cancer is a very emotional disease,” Cherry feels. “It conjures up unspeakable fears.” She followed her oncologist’s advice and started chemotherapy.

“I had one shot, I was very sick,” she explained.  Her oncologist told her that she had to have chemotherapy or she could not have Herceptin, so she did as much as she could. Then  “three months of Herceptin left me bedridden. Every injection made me ill. Legs seized up [with]  terrible pain.”

So Cherry told her oncologist she didn’t want any more chemotherapy or Herceptin. “I saw some awful sights in the chemo section. I really don’t want to destroy my body with poison,” she said.

Her oncologist didn’t take Cherry’s decision well.  “There is an attitude of making one feel guilty if you don’t take the treatment.  I think the oncologist finds me difficult…dire warnings were given to me,” she said.  On one occasion Cherry asked a nurse in the oncology unit about her decision.  “[She] was straight up with me.  She said I would have 2-to-5 years with treatment but the same 2-to-5 years without!”

After a “battle” she did have radiotherapy, “My ribs hurt from the radiation; that may never go away.  I tire easily.”

Cherry believes that people need to have a choice.  “No one wants to explain the damage that all the treatments do.  There seems to be a conspiracy of silence amongst the medical profession and I saw a lot of women in distress but saying nothing. Tolerating a lot of pain in the hope they are cured. And fearful if they don’t take  the magic potions it will come back.”

Making an informed decision is about having that choice. And informed medical decision-making is central to the doctor-patient relationship. But it is complex.  There are issues around understanding medical terminology, health literacy, health numeracy and understanding of risk.  The structure and content of physician-patient communication impacts whether or not patients are informed.

Physicians’ and patients’ perceptions of clinical encounters may not match.  One study utilized patient interviews obtained before meeting their surgical oncologist and after the treatment decision was made as well as interviews with clinicians after the office visit. There was limited agreement 38% between what the clinicians felt happened in the decision making process and what the patients believed occurred.

In a 2015 study comparing patients feelings about truth telling in end of life treatment although 94% of the patients wanted to be told fully about their prognosis, jut 80% of their physicians believed that their patients wanted to know.  For those with a terminal illness, almost 90% wanted supportive care but only  15% of their physicians said that that was their patient’s preference.

I wish I had been better advised…

The cancer treatment process is overwhelming with patients rushing from diagnosis to surgery to chemotherapy…from one treatment to another.  There’s little time to figure out what really matters, what they value most in their lives.

Support is crucial for that to happen. Cherry’s daughter is okay with her decision.  “She was completely thrown by my diagnosis” but she “said it was my decision.  She thought I was wise not to have chemo.”  Her friends have also been supportive, “I have good friends, they have been great.  I do find that some friends that have vanished. Mention cancer and they run. It’s very bizarre.”

Cherry tries to stay up-to-date with information about breast cancer and treatments.  “I question everything. I have read everything, all the medical journals. It makes them [her doctors] uneasy!” she said.

She’s glad she made this decision “My general practitioner said it’s the luck of the draw.  You can have all the chemo, all the pills and still it comes or do nothing and you might be okay.   No one knows.”  Cherry walks two miles a day-with a “stick.”  “The treatment has certainly caused damage,” she says.  But she adds, “One can’t help wondering if it will recur this is the fear that haunts everyone.”

What do you think? Did your physician or oncologist ask you what matters to you, what’s important to you before your treatment?  Has anyone asked you during your treatment?

**Cherry commented on the Medivizor post, “War On Cancer: The Right Metaphor?   That post asked if the language that we use to discuss cancer, “war” “fight” “battle” and how we label people with cancer as “victims” could impact decisions people are able to make regarding treatment.  She wrote:

“It’s individual choice how we tackle the disease. The treatment causes a lot of damage. I made an early decision not pursue treatment that made me feel ill …doctors not happy..dire warnings to scare me into more chemo etc. 50 years from now they will look back and laugh at current treatment.”

We reached out to her after reading her comment to learn more about her experience.