War on Cancer: The Right Metaphor? - Medivizor
SIGN IN

War on Cancer: The Right Metaphor? 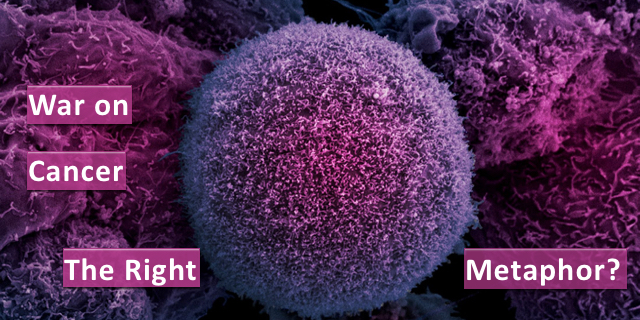 “For me, having lost my husband, it’s frustrating to hear publicly people saying to John McCain, ‘If anybody can beat this you can — you’re so tough.’  Not that it’s intentionally hurtful, but it does leave those of us who’ve lost a loved one thinking, ‘Was my loved one not tough enough? Did he not fight hard enough?'” ~Dannagal Goldthwaite Young @dannagal

In my personal experience of losing a loved one to cancer, I have had that same thought. “Did my love one not fight hard enough?”  The situation was that my family member decided not to do more chemotherapy or to participate in clinical trials.  She’d had a few months with her cancer in remission before it spread and metastasized.  Her brother felt that she needed to “fight more,” to continue with treatment.   He didn’t want her to “give up.”   It was difficult for all of us.  But it was her choice.

Impacts of the War on Cancer

Falling into the “battle against cancer” mentality is easy.  Perhaps it is because English can be difficult, limited and constraining in this instance.  In a previous post, Snow, Ice and Illness, I wrote about the Sami people who have over 100 words for snow.  Because they live with snow, they have specific words that describe the different types of snow: “slushy snow” (Soavli), “thin crust of snow” (Geardni), “new snow” (Vahca) and more.

To cope with this particular restriction of English and the emotional toll of a disease like cancer, metaphors around war and fighting have been our mainstay.

In Susan Sontag’s book Illness as Metaphor, she writes

“Punitive notions of disease have a long history, and such notions are particularly active with cancer. There is the ‘fight’ or ‘crusade’ against cancer; cancer is the ‘killer’ disease; people who have cancer are ‘cancer victims.’ Ostensibly, the illness is the culprit. But it is also the cancer patient who is made culpable. Widely believed psychological theories of disease assign to the luckless ill the ultimate responsibility both for falling ill and for getting well. And conventions of treating cancer as no mere disease but a demonic enemy make cancer not just a lethal disease but a shameful one.”

Anyone who doesn’t think that Sontag’s premise is on target should listen to members of the US Congress. According to Representative Mo Brooks, (R) Alabama,

“It [Trumpcare] will allow insurance companies to require people who have higher health care costs to contribute more to the insurance pool that helps offset all these costs, thereby reducing the cost to those people who lead good lives, they’re healthy, they’ve done the things to keep their bodies healthy….right now, those are the people who have done things the right way that are seeing their costs skyrocketing.”

So according to Rep. Brooks and others, a child who gets Hodgkin’s lymphoma has not “done the things to keep… [her body] healthy.”

Does the language that we use interfere with decisions that physicians and people with cancer make regarding treatment?

In the case of my loved one, her choice of stopping treatment was the right one for her.  It allowed her to actually enjoy time with her children and friends.  That was important to her and to us.  We have memories to cherish.

How do you talk about cancer?  What language feels comfortable to you?  Please share your thoughts in the comment section.