October, Metastatic Breast Cancer and the War on Cancer Metaphor
SIGN IN

Metastatic Breast Cancer and the Metaphor of War‎ 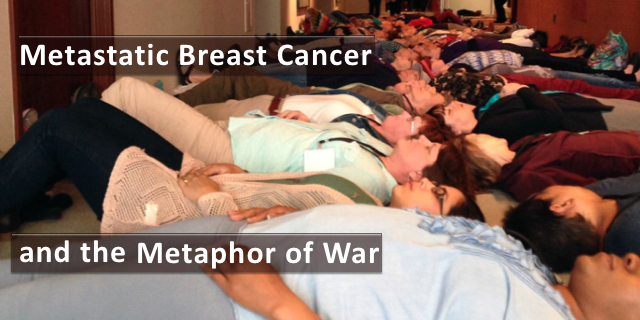 “Since being diagnosed with terminal cancer, I have had one goal: to live long enough to see The 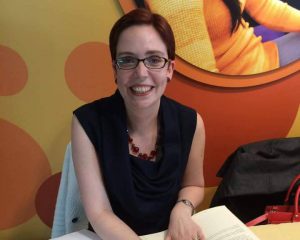 Girl start kindergarten. She was 2 and a half when I got diagnosed back in March of 2014, and starting kindergarten in 2017 would fall past median survival for me. Thinking about her having to start school without her mother brought me to my knees every time I thought about it. It’s the thing that would bring me to tears, that would break my heart–it was my biggest fear, by far.

Beth Caldwell’s post about being able to see her baby go to kindergarten appeared in August.  Two months later, October 16, she wrote the post, “Yep, I’m dying.”  Beth is a metastatic breast cancer activist.  In 2014, this former civil rights lawyer and young (37) mother of two small children, found a lump which proved to be metastatic breast cancer.   Yep, I’m dying is a crushingly truthful post.  Beth describes the results of her PET scan, her constant need for platelets, being unable to breathe and the pain.  She has decided not to do any more chemotherapy, 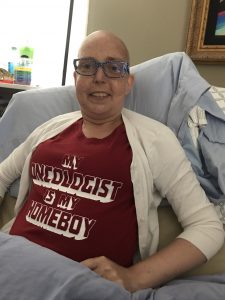 “We could try some chemo if my blood counts get better, like, eribulin or gemcitamine or some other crap, but it’s make me feel more like shit. I have 2-4 months to live and zero intention to poison myself and feel like chemo shit. I mean, seriously, would YOU want to give yourself drugs that make you feel like shit and then die? I doubt it.”

In the comments section a reader quoted Beth’s post,

“’I mean, seriously, would YOU want to give yourself drugs that make you feel like shit and then die?'”

The battle was ugly. But I fought. And had I died, I’d die fighting. But I lived and I’m now 41 years old.”

In my previous post, War on Cancer: The Right Metaphor?, I wrote how the dynamic of using battle, war and fighting motifs when discussing cancer colors our experiences.  As the above reader’s comment illustrates, it distracts from the reality that cancer is not one disease.

Cancer is, in fact, as individual as each of us, because it is a short circuiting of the normal patterns of life and death of cells.  That pattern is controlled by each individual’s unique DNA.  Comparing two different individuals’ experiences and cancer treatment results makes no sense.

It also interferes with discussions about end of life care. Palliative care may be the direction that someone with cancer wants to take.  The choice of continuing treatment or not continuing treatment must be guilt-free.  Yet the metaphor of fighting for life and warring against disease sets up a prejudice against the possibility of honorably stopping treatment.

But the war motif does something far more insidious.  It impacts our empathy and leaves those who are metastatic in opposition to those who are not.

The language of war implies that there are “winners” and “losers” in a situation where “winning” or “losing” depends on factors completely outside the control of the individual.  The breast cancer community has failed to reconcile the legitimate anger of those with metastatic disease and the understandable need for encouragement and optimism desired by those whose disease has not become metastatic.

Beth Caldwell and others with metastatic disease like Lori Marx-Rubiner, who died recently of MBC, work tirelessly, even as they suffer.   Their anger may make people uncomfortable, or their pain may be something the healthy do not wish to face, but ignoring them or calling them names is not the answer.

For the last three years, Beth has been tirelessly working to remind us that more money must be provided for research on metastatic breast cancer.  She organized the first cancer “Die-In” in Philadelphia (See the feature image above) and is one 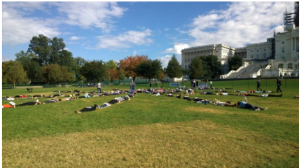 of the founders of MET-UP, an organization that holds a “Die-In” on October 13 (Metastatic Breast Cancer Day) on the Capitol grounds.

“She mentioned the slim odds of living to see her daughter, age three, through kindergarten. She told about her son, age eight, asking her husband about how much longer she’ll be around.  She shared some bleak statistics about deaths from metastatic breast cancer, and said: ‘The only thing that will change the horrific reality is research.'”

It is up to those of us who are not sick to help them.  For those whose loved ones have died from this terrible disease, the plea #stageIVneedsmore resonates strongly.  It is up to us to keep bringing up the need for more funding for research on metastatic breast cancer, especially during October’s pink storm.  Because the fact is, “522,000 people…will die from metastatic breast cancer globally every year while waiting for a cure to be found.”

Thank you Beth for all your advocacy and determination.  Thank you to all the men and women who have joined the effort to increase awareness of metastatic disease.

What are your thoughts about the language of cancer?  How does the war on cancer metaphor impact discussions of stopping treatment or of end of life care?  Please share your responses in the comments section below.

We are very sorry to write that Beth died on All Souls Day, November 2, 2017.  A fund has been set up in her name to find  “a cure for dying cancer patients…. This fund will go specifically to Dr. Kevin Cheung, an MBC researcher at Fred Hutch who Beth knew and believed in. One of her last messages read: ‘Get Kevin’s research the money it needs!’ Thank you for working to fulfill this wish.”

“A human being who surrounded herself with life and love.

Mother of two amazing kids, one of which was a preemie at 27 ½ weeks weighing 2lbs. 14 oz. Nine weeks in the NICU together with our first. She wanted to get pregnant again, knowing what we knew, who went overdue with our second child. Each of them unique in their own way. Each of them, part her. She loved them so much. So very, very much….

Most importantly to me, my wife of a few days shy of our 15th wedding anniversary. A woman I love and have loved for 18 years. She has done amazing things, and she was an amazing person and it pains me greatly that I shall never look upon her again; never have a conversation with her again; never get to make her laugh, or see it when she is so very, very excited about something. This is my wife, and she is amazing person.

She died this All Souls Day, on the 2nd of November, in the 2017th year Anno Domini. She is loved and was surrounded by her kith and kin and the first dog she ever owned. I held her when she went. It was a rainy Autum day in Seattle which switched to sunshine in the afternoon, which is perfect for a native Seattleite.

‘I hope the end is joyful, and I hope never to return.’
-Frida Kahlo”