5 Facts You Probably Didn’t Know About Your Blood 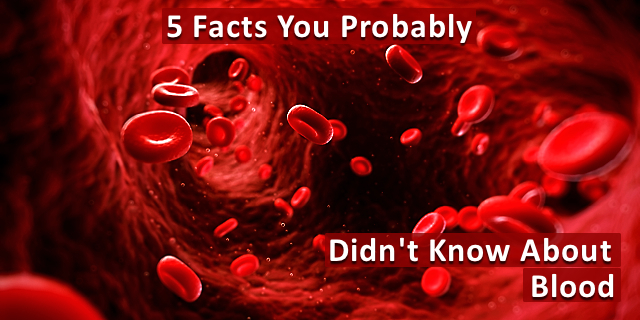 Blood, your own private sea, moves through your body because of your powerful, pumping heart.  Through blood, every cell in your body communicates with one another.  What do you know about this special fluid?

Your blood is not just fluid.

Men have around 12 pints of blood in their body while women have about 9 pints.

Your kidneys are vitally important to red blood cell production.

When your body’s tissues recognize that there is a low amount of oxygen available, they signal the kidneys to produce a hormone called Erythropoietin.  This hormone controls the production of red blood cells.

Blood is made in the bone marrow.

In the bone marrow, there are stem cells, called hemocytoblasts, that are pluripotent, meaning that they can become a number of different types of cells.  These are the cells that evolve into either a common myeloid progenitor (CMP) or a common lymphoid progenitor (CLP). 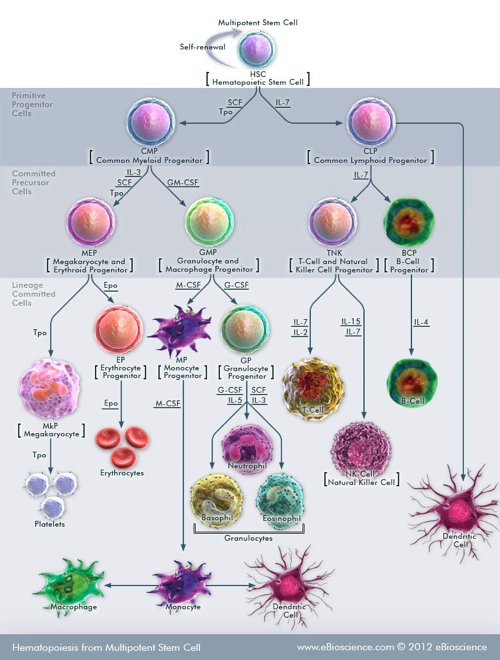 2) megakaryocytes, the cells that produce platelets,

3) monocytes, the cells can transform into macrophages, which digest foreign substances and diseased cells or dendritic cells that activate white blood cells) and

Red blood cells live for only around 120 days.

This is because, for most of their lives, erythrocytes or red blood cells live without a nucleus.

During the formation process, called erythropoesis, red blood cells are produced.  Through several stages, hemocytoblasts (the pluripotent stem cells) transform to CMPs and then to  proerythroblasts.   At the  early erythroblasts stage, the cells ribosomes (protein factories inside of all cells) start to synthesize large amounts of hemoglobin.  Hemoglobin is the protein that carries oxygen in red blood cells.  As the hemoglobin accumulates, the cell becomes a normoblasts.  Very shortly thereafter, normoblasts lose their nuclei and are called reticulocytes.

After 120 days, red blood cells look fairly ragged, losing their shape.  Removal of old erythrocytes occurs in the liver, spleen and bone marrow.  A recycling process begins.  Macrophages in the spleen, liver and bone marrow engulf the old red blood cells and break down the hemoglobin into amino acids, iron and globin. The globin becomes  bilirubin, a waste product that goes to the liver, then bile duct, into the intestines and finally out of the body through feces.  Iron and the amino acids go to the liver and then back to the bone marrow to be reused to make new erythrocytes. 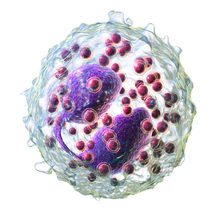 Eosinophils release enzymes that attack the cell membranes of bacteria.  But they are more active against parasites.  They are also involved in allergic reactions, releasing chemicals involved in inflammation.  If you have high numbers of eosinophils in your blood stream, it may be a sign that you have parasites or are having an allergic reaction. 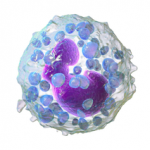 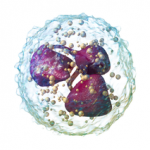 The most common white blood cells in the blood stream are the neutrophils.  These cells ingest bacteria and other invaders. They also create fibers in the tissue that trap bacteria in place. 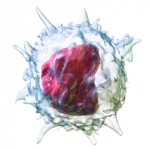 When there is an infection in a tissue, monocytes move out of the blood stream and into the tissue.  Over a period of about 8 hours, they enlarge and become macrophages.   As macrophages these cells ingest the bacteria, viruses and infected cells in the tissue to stop the infection. 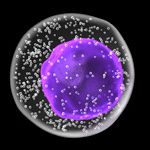 Natural killer cells also ingest infected cells and they are important first responders to viruses.  These and the other innate immune system white blood cells send out chemicals to attract other white blood cells to the site of infections.

The adaptive immune system spring from the lymphoid stem cells.  Lymphocytes either complete their development in the bone marrow–called B-cells–or in the thymus–called T-cells. 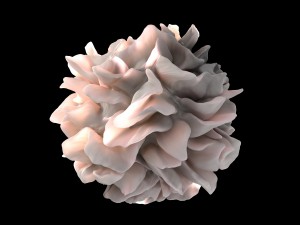 responses.   Dendritic cells and macrophages are the links between the innate and adaptive immune system.

Immature dendritic cells are found in all tissues and their purpose is to sample their environment for foreign substances or antigens.  When they connect with those substances, they quickly mature becoming Antigen Presenting Cells (APCs).  They then go to the lymph nodes where they activate T-cells and B-cells.

T-cells become T-helper (Th) cells and cytotoxic (Tc) T-cells.  Cytotoxic means that it kills cells that are damaged.   When B-cells are presented with an antigen, they change into a plasma cells and creates antibodies to the antigen.  The most important thing to remember about the adaptive immune system is that it has a memory.  This is why, if you have had measles, you will not get them again.  It is also why vaccines work.  Read more about white blood cells, the immune system and immunotherapy here.

And we haven’t even talked about platelets!  There’s more to learn about your blood.  In another post we will review platelets and some of the most routine blood tests and what they tell us about our health.