300 Facts You Didn't Know About Celiac Disease!
SIGN IN 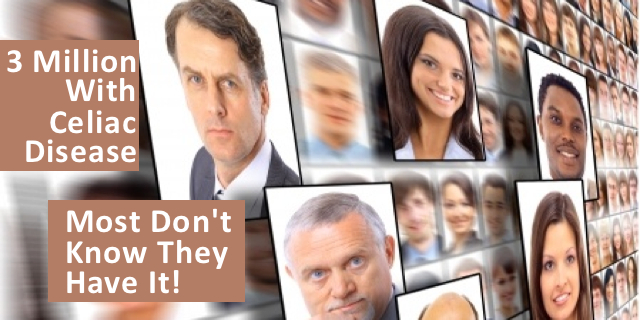 Okay.  The title is somewhat misleading.   But, since 1) there are over 300 symptoms associated with celiac disease; 2) people can have celiac without symptoms…AND 3) 97% of people with celiac disease are undiagnosed–you’ll forgive me.

What is Celiac Disease?

Celiac disease is an autoimmune disorder with no cure.  According to the University of Chicago Celiac Disease Center: “Celiac disease affects 1% of healthy, average Americans. That means at least 3 million people in our country are living with celiac disease—97% of them are undiagnosed.”

Gluten: What is it? Why does it matter?

There is a lot of talk about eating a gluten-free diet these days.  It seems like a fad:  but it isn’t for some people.  Gluten 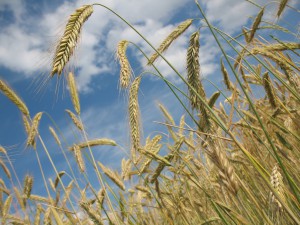 is a protein found in wheat.   People who are diagnosed with celiac disease MUST NOT consume gluten because gluten causes their immune systems to attack the lining of their small intestines.

Unfortunately gluten is everywhere: in medications, cosmetics, lotions and food.    According to a double-blind, randomized trial conducted in 2007 at the University of Maryland  over a 3-month period, no intestinal damage occurred in most of the adults with celiac disease who ate 10 mg of gluten per day (20 ppm of gluten).  However, 50 mg per day caused damage.    So, very small amounts of gluten can cause the immune system to destroy the villi of the small intestines.

How is Celiac Disease Diagnosed?

A blood test is the first  step to diagnosis.  Ninety-eight percent of people with celiac who eat gluten will have a positive blood test for Tissue Transglutaminase Antibodies (tTG-IgA). The second confirmatory test is an endoscopy.  This is a procedure, much like a colonoscopy, where a gastroenterologist uses a scope to look at your small intestines.  During the procedure, the gastroenterologist takes small pieces–a biopsy–of your small intestines. 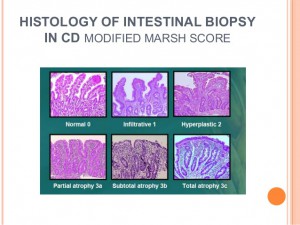 Normally, your small intestines or duodenum have villi which absorb nutrients from your food.  For people with untreated celiac, these villi have been and are being attacked by the immune system.

In this series of slides, you can see the change in the way the villi look in the small intestines from normal to someone with diagnosed celiac disease.  There are no villi or “partial to total atrophy” of the finger-like projections in people with a celiac diagnosis.

This change means that nutrients like vitamins, minerals, iron, proteins and carbohydrates do not get to the cells of the body.  People lose weight.  In children, stunted growth occurs.  Abdominal pain, diarrhea, fatigue and fuzzy thinking are a few of the symptoms.

According to the Celiac Disease Foundation, common symptoms in children include: 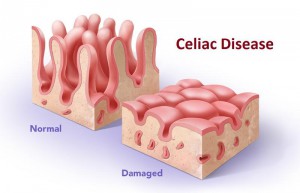 For adults, the most common celiac disease symptoms include:

As you can see, the symptoms that adults experience-like infertility and recurrent miscarriage–are not obviously associated with the digestive system.

Moreover, other autoimmune conditions like Type 1 diabetes and autoimmune thyroid disorder are associated with celiac disease.

Celiac disease tends to run in families.  First degree family members have a 1 in 10 risk of developing celiac disease.

Below is an infographic, created by the Cleveland Clinic, which provides some guidance on hidden sources of gluten–a true problem for people with celiac disease.