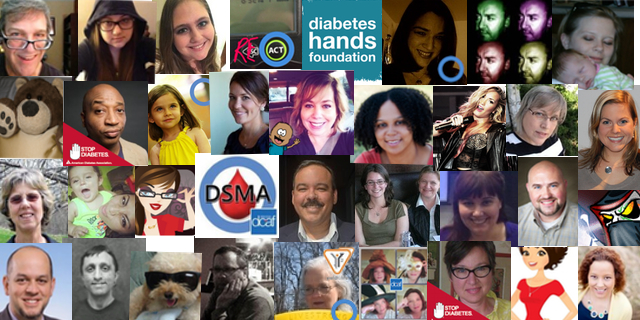 Feeling alone in your life journey–with illness as your companion—can make the burden of chronic disease seem unbearable.  As Kerri Sparling writes, “For much of my life, I was the only diabetic I knew…. Where were all the people who were living with this disease, like I have been since I was a little girl?  Was I the only diabetic out there who felt alone?”

August 1991, the World Wide Web, part of the Internet, became available to the general public.  Blogging started in January 1994, when a college student, Justin Hall created Links.net.  By December 2004 Merriam-Webster pronounced the term “blog” the “Word of the Year.”

In early 2004, Scott Johnson started his blog describing life with diabetes and Kerri began blogging in early 2005.  At the time, Kerri wrote, “The purpose of this is to make contact with other diabetics. It’s one of those diseases (or maybe they’re all this way, I’m not sure) where even if you have the mechanics of it completely mastered, the psychological battle is just as daunting…. There is so much involved in the daily maintenance of diabetes that a support network isn’t just nice, it’s necessary.”

Skip forward 10 years and what has evolved is the Diabetes Online Community (DOC), an informal network utilizing social media platforms on Facebook, YouTube, online chat rooms and forums like Diabetesdaily,  TuDiabetes, a part of Diabetes Hands Foundation and dLife.  But its true underpinnings– what sustains, strengthens and reinforces its existence–are the diabetes patient bloggers.

With the start of Twitter in 2007, a new opportunity to connect emerged.   And another person with diabetes, Cherise Shockley started a weekly chat called Diabetes Social Media Advocacy on July 21, 2010. #DSMA meets every Wednesday at  9 pm EST.

The chat is for anyone with diabetes, Type 1, Type 2, gestational and LADA (Latent Autoimmune Diabetes in Adults).  Cherise herself has LADA, diagnosed at age 23.  It is also for family, friends, caregivers and anyone who is interested in life with diabetes.

This community is actively engaged in making a difference.  In a recent chat (July 2, 2014), participants discussed their advocacy interests. Here are a few tweets to show the breadth of their interests and work.

Q2: I am passionate about debunking myths. Recently asked if my pump meant I had the “really bad diabetes.” *facepalm* #dsma

Q2. I’m also passionate about advocating that people get the proper care that they need. So many PWDs don’t get what they deserve. #dsma — Allison Nimlos (@AMNimlos) July 3, 2014

Q2 My interest is in finding a creative way to educate non diabetics to how serious diabetes is. #DSMA — A Diabetic Comic (@ChelcieRice) July 3, 2014

Q2 I advocate that diabetes isn’t a death sentence, it can be controlled and you can still live a normal life! #dsma — Lady Imp (@PavedSilverRoad) July 3, 2014

Q2: continue teaching the world about diabetes and how to spot signs of low and high. And obviously, i want to advocate for a cure! #dsma

How does DOC impact these individuals’ lives? Reaching out immediately to share feelings with people who understand is a huge benefit.

Participants offered of support and encouragement in response to this tweet. Other tweets confirmed the importance of the DOC.

Q4 Most definitely. In the #DOC I sorta found a home. A home that didn’t exist when I was first diagnosed. Stupid Windows 3.1 #DSMA

Q4: the #DOC has improved my life x 10000. In advocating as well as in caring more about being healthier. It’s great that y’all GET IT #dsma

Finding others with diabetes who understand the experience empowers.

Q4. The #DOC introduced me to support, then advocacy seemed like a natural fit #dsma

Q4 Yes, the #doc gave me more inspiration to use my voice more often than I had been before! #dsma

Q4. Not necessary but it has help me find my voice about D after 19 years of silence. #dsma

Q4. Started a blog (http://t.co/3fmV1A90Aa) which helps me org thoughts about D – I think that helps me be more vocal IRL #dsma

Q4: Because we need change and we’re starting to get enough voices to be heard! Let’s get louder! #dsma

The community continues to push forward to reach more people by whatever means they can. For example, Diabetes Community Advocacy Foundation which runs #DSMA has started a BlogTalkRadio series. One is for for parents of children of diabetes and parents with diabetes, not only in America, but around the world every other Monday at 9:00 pm EST. DSMA en Vivo occurs on Tuesdays 8pm CST and Thursday evenings at 9pm EST Cherise, Scott K. Johnson, and George Simmons, PWD type 1, present DSMA Live.

What do you think? Do you have an online community that is making a difference for you? Share with us!