"Right To Try": Don't Buy That Snake Oil or Needed Legislation?
SIGN IN 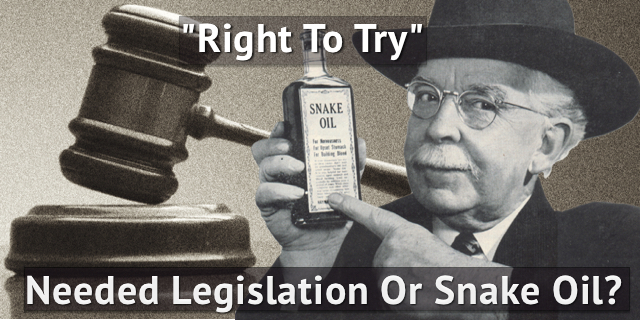 Thirty-eight states in the US have passed “Right To Try” laws. These are laws that are created to give terminally ill patients who have run out of options access to experimental drugs that have not completed the FDA approval process.  There is an effort underway to pass this type of legislation on a federal level.

T1) Do we really need a nat’l “Right to Try” legislation, beyond today’s Expanded Use/Compassionate Use for investigational agents? #lcsm

A1: No, in fact it could reduce or threaten the protections afforded to patient through the current process #lcsm

A1: only needed if it will help patients get these drugs more quickly. Seems to take forever to get drugs via compassionate use. #LCSM

I would give everything I own plus some if it could save/prolong Andy’s life. #lcsm

This is an emotional issue.  It sounds like a good idea–give people who are desperate for experimental drugs access to them and reduce the liability of pharmaceutical industry if they provide the drugs–but is it?

To make a decision, it’s important to have some background and understanding. Here’s some history to get started.

When the FDA approval process got teeth

After World War II, a lot of people in Europe and the US were having trouble sleeping at night. Invented by the German cosmetic firm, Chemie-Grünenthal GmbH, thalidomide entered the market as an over-the-counter drug in 1956. Marketed as the only non-barbiturate sleeping aid around, it was a hit. But a side

effect, peripheral neuropathy, caused the German regulators to make it a “prescription only” medication. As sales slumped, the producer looked for other ways to market their product. They found a distributor and marketed thalidomide as a morning sickness pill in Germany and overseas. In late 1960, Dr. William McBride, an Australian obstetrician, started prescribing it for patients experiencing severe morning sickness. Nine months after the fact, his patients delivered babies with severe deformities: missing or short limbs, missing ears and eyes, and internal organs.  He compiled his findings and exposed thalidomide’s “side effects” in a letter to the editors Lancet, published in December 1961.

Meanwhile, the manufacturer was actively pressing the FDA to approve their medication for distribution in the US.  Frances Kelsey, an FDA inspector, held up the approval because she felt that the evidence provided by the company was inadequate. Her efforts were rewarded with recognition by President Kennedy and with the passage of a new law in 1962 which tightened the approval process for medications–requiring proof of safety and effectiveness.

After the law’s passage, the FDA reviewed thousands of drugs that were on the market. They found that 70% of the drugs were making claims that weren’t supported by evidence.

So the approval process, going through Phase 1, 2 and 3 clinical trials are to determine safety (Phase 1) then effectiveness (Phases 2 & 3). Of 100 possible drugs that enter Phase 1, only 5 make it through.

Next question: Is there a process in place now for terminally ill patients to have access to experimental drugs  if they have run out of options?

Yes.  During the AIDs epidemic in the late 1980s and 90s, activists pushed for reforms of the FDA process.  A program called “Compassionate Use” was started in 1987.  Then in 1992, an accelerated approval process was implemented through Congressional action to let FDA approve drugs for life threatening diseases before the drugs were demonstrated to extend patients’ lives.
Finally, Compassionate Use was expanded in 2009 to get patients access to experimental treatments when they could not enroll in clinical trials.

Compassionate Use is also called Expanded Access.  According to the FDA, completion of a form, called an Emergency Investigational New Drug (EIND) Application takes around 45 minutes –changed in 2014 from a 100 hour process-and is submitted by the patient’s physician. . These emergency requests have a turn-around time of 24 hours.  Approval rates are at 99%.  However, a fact that influences this approval rate is pharmaceutical company agreement to provide the treatment.

One benefit of FDA review of these requests is that the FDA scientists have access to confidential information provided by the pharmaceutical agency, that the patient’s doctor doesn’t have. With that information, the FDA can make safety-oriented changes, like adjusting the dosage or the frequency of the treatment. This protects the patient from the very beginning.

Supporters of “Right To Try”

I was told I would die in a year. Used med every oncologist knew worked but was technically off labei. Am here 9 yesrs later. Would I I have taken a risky Phase I drug ar that time weighing possibility versus certain death? Yes. #lcsm

I’m sure patient groups will find that risks might outway, but I’m wondering how many actual pts would say no to something if last possible treatment option. My husband was asking about a liver transplant. He would’ve done anything to live. #lcsm https://t.co/eO1VVHuaNI

People who support “Right To Try” feel that desperately ill people should be able to choose for themselves if they want to take a risk with investigational drug.  Additionally, supporters would like this legislation to force drug makers to provide experimental medications to dying patients.  And there are some who believe that “Right To Try” will reduce the waiting time for experimental treatments as compared to the FDA’s Compassionate Use.

Critics of “Right To Try”

Another negative they cite is that neither physicians nor the pharmaceutical industry are held liable should something go wrong with the treatment.

Those who oppose are concerned that patients will want to opt out of treatment that is standard of care (SOC).

T1: Might it cause more patients to ignore SOC treatments in favor of untried or unsafe methods touted through the grapevine? #lcsm

Moreover, legislation that has been passed in the states allow insurance companies to drop coverage of patients who use “Right To Try” treatments. Additionally, patients can become ineligible for hospice care. Health insurance doesn’t have to cover any complications that arise with the experimental treatment and the law in Colorado allows insurance companies to deny coverage for as long as 6 months after receiving the last treatment of an experimental drug.

“Right To Try” opponents are concerned that participation in clinical trials will suffer if patients are able to obtain experimental medication outside of clinical trials.  Not only that, if a patient receives “Right To Try” treatment and is injured by that treatment, the FDA cannot use this information to deny drug approval.

Gut An Established Program or Improve It?

As a patient with metastatic cancer wrote in an opinion of post  for Slate:

“For nearly a decade, the FDA’s expanded access program has been available for people like me who are fighting life-threatening diseases and who want the option to have access to new therapeutic approaches in a responsible and ethical manner, especially when there is no other FDA-approved treatment option. And that means we already have a right to try, one that offers greater protection for the already vulnerable individuals.”

A1- it’s my understanding- at least from secondhand experience that sometimes Compassionate Use can be a bit difficult. I’m for it if “right to try” makes it easier for access. #LCSM https://t.co/ntDB6ZIJst

First, there are still issues around the timeframe and difficulty of getting access through Compassionate Use.

T1 Right to try laws in the states haven’t made much difference in patient access that I can see. Laws don’t force pharma to make their drugs available for free to anyone who wants them. They just make docs less liable. #lcsm

Second, requiring the pharmaceutical industry to supply the treatment would improve the process.

In an almost perfect world, FDA compassionate use would 1)require pharma to supply drug, 2) be less cumbersome (private practice oncs don’t have IRBs), 3) would allow us access earlier, before on death’s doorstep. Since world is far from perfect, RTT is an imperfect option #LCSM

Third, as this patient (and retired ob-gyn) with metastatic breast cancer states–Compassion Use needs to  allow earlier access.

Very true. Would add that many patients in clinical trials are afraid/hesitate to report side effects for fear of being removed from the trial. #lcsm

Kelly from metastatic breast cancer land here. In a perfect world all advanced/metastatic cancer patients would be in clinical trials (in their hometowns) and this would be moot. #LCSM

The “Right To Try” state-level legislation have stripped protections from extremely vulnerable people. Perhaps, instead of reducing the FDA’s mandate, implementing changes to Compassionate Use would improve access and provide patients hope.

What do you think?  Please share your thoughts about this issue in the comments section.