Quick Guide: Understanding the Importance of the FDA’s Keytruda Approval 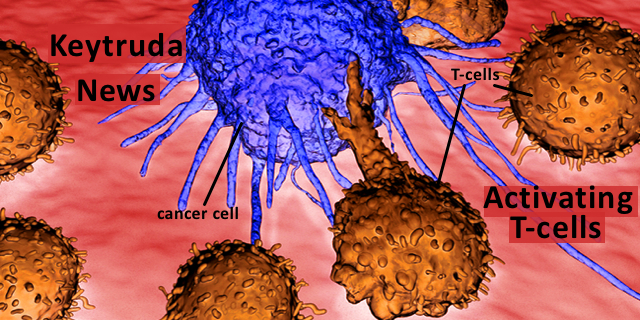 In July 2015, we published a post called Patients Included In Research: Studying Cancer by Mutation Not Organ.  In that post, we shared the goal that cancers would be treated not by the site of origin, but rather by their genetic features.  Achieving this goal is closer than you think!

This week the FDA announced accelerated approval** of a “…treatment for patients whose cancers have a specific genetic feature called a biomarker.  This is the first time the agency has approved a cancer treatment based on a common biomarker rather than the location in the body where the tumor originated.”  That drug is called Keytruda (pembrolizumab).

Keytruda is a type of immunotherapy drug that targets a particular pathway. Remember in the Oncology Basics series Understanding Cells?

Cells communicate with each other via molecules…these molecules tell (or “signal”) cells  to create proteins.  The creation of proteins requires many steps.  Scientists have discovered the components of these steps.  These step-by-step processes are called “Pathways.”

In this case, the pathway is one that identifies normal cells so that the immune system doesn’t destroy them.  In 2000,  researchers led by Dr. Gordon Freeman discovered proteins on the surfaces of normal cell surfaces called PD-L1 and PD-L2 (for programmed cell death ligands 1, 2).  This protein identifies normal cells so that the T-cells (cells of the immune system) that are moving through the body, killing foreign cells, viruses, bacteria etc., do not destroy normal cells.  The way this works is that there is a corresponding protein on T-cells called PD-1 (programmed cell death 1).   As T-cells pass by normal cells, their PD-1 protein binds with the PD-L1/2 proteins on the normal cells.  This deactivates the T-cells and the T-cells don’t kill the normal cell.

What does all this have to do with cancer?

The next year, in 2001, these same researchers described how some cancer cells have co-opted this system, stealing the mechanism used by normal cells to escape T-cell destruction.  Some cancer cells disguise themselves as normal and have the PD-L1/L2 proteins on their surfaces.  They go undetected. That is one of the ways that the cancer cells spread.  Here is a video to explain this process.

A drug that can block PD-L1 or PD-L2 can activate T-cells against cancer cells.  Keytruda is one such drug.  In this case, the FDA’s approval is for

“treatment of adult and pediatric patients with unresectable or metastatic solid tumors that have been identified as having a biomarker referred to as microsatellite instability-high (MSI-H) or mismatch repair deficient (dMMR).”

This means that Keytruda can be used for solid tumors with a certain biomarker, cancers, anywhere in the body–not just skin cancer or lung cancer.  Keytruda can be used for tumors that surgeons have been unable to remove because of their location or their shape (unresectable) or that are metastatic.  Tumor can be tested for the biomarkers MSI-H and dMMR (these are identifying traits of the cancer).  Keytruda is effective against tumors with these biomarkers.

So cancers of the breast, prostate, thyroid, bladder, colon and rectum, endometrium are just some of the cancers that have been found to have these biomarkers and would be new possible targets for Keytruda. Keytruda has already been approved to treat metastatic lung cancer, melanoma, urothelial, head and neck and refractory (meaning recurrent after usual treatments) classic Hodgkins lymphoma.

Here is another video that may be helpful to understand the PD-1, PD-L1/2 mechanisms that Keytruda targets.

**Accelerated approval means that further studies that confirm the medication’s effectiveness and safety are required but that the medication is available because there is “significant unmet clinical need.”