The Male Breast Cancer Coalition: Men Have Breasts Too
SIGN IN

The Male Breast Cancer Coalition: Men Have Breasts Too 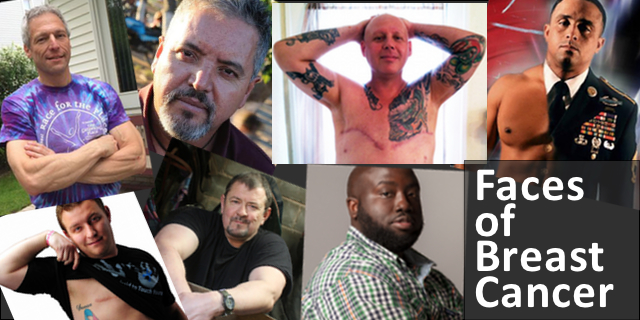 Peggy Miller thinks outside the box.  So in 2003, when her family and many others in her community didn’t have health insurance, she helped start a ”physical night” at the local high school. For $25, students received physical exams from local physicians.  Motivating Peggy’s activism was a lump that her son, 17-year-old Bret, had recently found under his right nipple.  During physical night, 6 doctors reassured them that the lump was “just calcium” and was part of “becoming a man.” **

An active teenager, Bret played football and worked at a swimming pool in the summer and ice rink in the winter.  After graduation, he attended Kansas University and made a point of asking other physicians about the lump.  He got the same message.

About six years later, Bret told his dad about an orange fluid that sometimes discharged from his nipple.  Unfortunately, “men don’t know that it is anything,” Peggy relates.**  Nothing was done.

By 2010, Peggy remembers, all her children (3 boys and a girl) had gotten corporate jobs and insurance. “I sent an email out to all the kids to get physicals and reminded Bret to have that lump checked.”**

“Cancer is not prejudice it chooses whoever it wants.”~Bret Miller

Yet, “There really wasn’t any reason for me to think that I had the [BRCA] mutation. There wasn’t any breast cancer or ovarian cancer…with the women in my family,” Lori said in an interview.   She had had a biopsy at age 43, which diagnosed  Lobular carcinoma in situ (LCIS).  With LCIS, abnormal cells start to grow in the milk producing glands of the breast.  Though not cancer, the condition indicates an increased risk of developing breast cancer.

Alerted by her male cousin’s diagnosis, she got tested and discovered she had the BRCA mutation.  After disclosing the news to her family, both parents were tested:  she inherited the BRCA mutation from her father.**

Men can have BRCA too and can pass the mutation on to children of both sexes.

“It was emasculating when I got diagnosed…that’s why I didn’t tell any of my friends.”~Bret Miller

Embarrassment Gets In the Way of Support

Immersed in our cultural norms, it can be difficult to step back and see what influence they have on who we are.  As we grow up, we learn the cultural definitions of maleness and femaleness. In this milieu, breasts are female, part of feminine sexuality and motherhood.   It’s little wonder that a breast cancer diagnosis causes emotional distress in men.

As boys grow up, they are forbidden to go into the girls’ locker room.  Medical facilities where diagnostics and treatment occur, are like those locker rooms–designed for women.  Men enter a world of  pink. They are handed forms with questions  about menstruation and pregnancy.  They don pink hospital gowns for their mammograms. and horrified he had a “woman’s disease,” he refused to make his diagnosis public. Cheri decided to begin a personal mission to raise male breast cancer awareness nationwide.

“Don’t the doctors check your breast in a physical?” I asked. Bret and his Dad both responded ‘no, they check our nuts and butt, but not our breasts.’”~Peggy Miller**

But back to Bret:  Bret’s physician ordered a sonogram.  The sonogram led to a lumpectomy and biopsy confirming breast cancer.  April 28th 2010 he got the call.  “He just blurted out the words and said he’d call back in a few days after looking more closely at the pathology report.” May 18th a mastectomy followed with 4 months of chemotherapy. The day after his mastectomy, May 19th 2010, Bret and his parents started The Bret Miller 1T Foundation.  Being the youngest man ever diagnosed with male breast cancer is a dubious distinction but Bret has a mission “ to spread the word to everyone, men and women, young and old, that breast cancer does not discriminate, it can happen to anyone at any age and to MEN too!”  He and other survivors speak at high schools and colleges letting people know about male breast cancer.

“There’s very limited information out there about us and yet we’re dying by the hundreds on a yearly basis.”~Male Breast Cancer Survivor “Men Have Breasts Too” Trailer

The Birth of The Male Breast Cancer Coalition

Social Media is changing lives.  It brought Bret and Cheri together to form the Male Breast Cancer Coalition (MBCC) in 2013.  Under the MBCC, Cheri continues her efforts to convince states to make the third week in October Male Breast Cancer Awareness Week.  Lori, along with Mark Spark Welch, is using her expertise to produce and direct “Men Have Breasts Too,”  a documentary sharing the stories of male breast cancer survivors.  Bret continues spreading awareness and teaching guys how to check their breasts.  And Peggy works to connect men with each other, giving them mentors,  support and advocacy.  The Male Breast Cancer Coalition recently received acclaim  for its advocacy on behalf of a male breast cancer coalition member. In this effort, the organization pushed Express Scripts to cover Jerry Rubenstein’s medications for Stage 4 breast cancer, after the company refused to pay.

“I don’t consider it a journey.  It was a trip to hell and back.”~Male Breast Cancer Survivor “Men Have Breasts Too” Trailer

There is much work to be done.  As Mac Holmes, a former Air Force Squadron Commander, who has Stage 4 Breast Cancer wrote in his survivor story on the MBCC, clinical trials are excluding men from treatments that may help them.   Only 3% of all the money for research on breast cancer goes to stage 4  (the breast cancer that kills), while 0% goes to male breast cancer research.

“I became like I was a leper.  My family, my friends, never heard of male breast cancer. And it just, it freaked them out.”~Male Breast Cancer Survivor “Men Have Breasts Too” Trailer