Too Young for Colorectal Cancer? 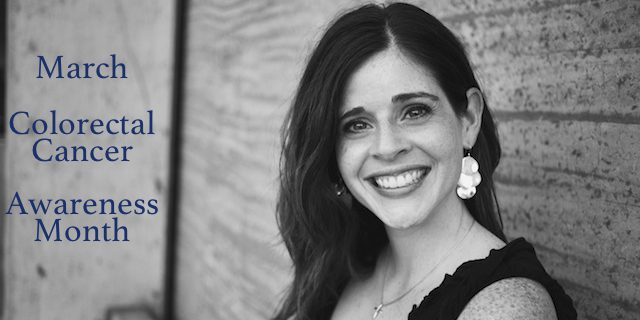 During junior high, Danielle Ripley-Burgess saw blood on the toilet paper when she went to the bathroom.  She asked her mother about it, looked it up on the Internet and decided it wasn’t anything serious.

But it kept happening and got worse. “The blood in my stool…sadly, bec[a]me something normal.”…”By the time age 16 or 17 hit, it was heavy bleeding, dark red or even sometimes black.”*

Embarrassed, Danielle kept it a secret because, like most teenagers, she didn’t want her parents to take her to the doctor and “make a big deal out of it.”

Finally on a night when the bleeding was severe, Danielle told her boyfriend (now husband) Mike.  Fortunately her parents overheard Mike begging her to see a doctor and intervened.

At the family doctor, her father pleaded, “treat her as if she were your daughter.”  He did.  The doctor sent Danielle to a gastroenterologist, where she had a colonoscopy and, at 17, was diagnosed with Stage III colorectal cancer (CRC).

Increasing Incidence in People Younger than 50

Yes, Danielle’s story is rare but it is surprising to learn that younger people are getting CRC.  A recent epidemiological study found that the incidence of CRC among people ages 20 to 49 has increased by 2% between 1975 and 2010.  From the data, the researchers predict that, by 2020, the rates of colon cancer in people ages 20 to 34 will increase by 37.8% and for rectosigmoid and rectal cancer by 49.7%.

In 2001 with diagnosis in hand, Danielle and her parents searched the Internet for help and understanding, “I still have the old printouts from our inkjet printer dating back to 2001 – my parents printed off all of the information from websites that they could find. With online information and patient support still being relatively new, they printed anything and everything…because it was written for patients decades older than me, we were trying to figure out how it applied to us and my case.”*

Too Young for Colonoscopy?

Unfortunately, other young people haven’t been as fortunate as Danielle.  For 8 months, Melissa Bates tried to get a referral to a gastroenterologist.  When she went to her physician reporting bleeding, her doctor “threw a fit….He told me I  had hemorrhoids, and told me my insurance company wouldn’t cover a colonoscopy or G.I. visit because I was too young for cancer.”  She finally had a colonoscopy only after she “called my mom…begged her to get me in touch with a doctor that could actually help me. After a few more frantic days and many phone calls, my mom called me back to confirm an appointment at the end of November. I bursted into tears as I told her I couldn’t wait that long. I called the office and begged for a sooner visit. I ended up with someone’s cancelled appointment. On the last Friday in September, I skipped class and drove 5 hours across state lines to finally see a G.I. doctor.” At age 20 she was diagnosed at with aggressive Stage III rectal cancer. Sadly in 2014, at age 26, she died.

For Danielle, life has taken many turns. She and Mike married (2005) and adopted a little girl. Unfortunately, in 2009 during one of her routine scans, her gastroenterologist found Stage I colon cancer which was surgically removed.
Then, in 2013, “I got a random call …that started out with, “Is this the same Danielle that visited our hospital in 2001?  We have an update on your genetic testing.”  She now knows she has Lynch Syndrome, an inherited genetic disorder, which oddly enough, Danielle didn’t inherit.

Lynch Syndrome is a mutation which makes you more susceptible to colon, stomach, liver, urinary tract, small bowel and brain cancer.  If you are a woman you have an increased risk of gynecological cancers (ovarian, endometrial). The Lynch Syndrome mutation is common-one in 440 people in the US carry this mutation– yet it is under diagnosed.

In Her Own Words: Advice on Coping with Colorectal Cancer about my experience was The Colon Club’s “Colondar.” I became a model in the 2009 calendar, which turned my world around. On the set of the photo shoot, I became friends with other people who’d also been diagnosed at a young age. I went from knowing zero people like me to having a long list of new friends who were just like me. The power in getting their support changed my outlook on cancer, inspired me to speak out and get involved – and it also got me through my second occurrence when I was diagnosed just months after meeting everyone. The Internet connected me with The Colon Club, and it’s kept me connected to the community ever since. Social media is what connected me to the team I work with now, Fight CRC. Because I was so entrenched in the colon cancer community when diagnosed with Lynch syndrome, I didn’t really miss a beat. I was empowered, armed with information and surrounded by many people who’d also received that news. They assured me all would be OK, that we had work to do, and to get at it!

I’d encourage anyone facing any type of condition to search out places to meet people like you – even if you feel like you’re rare. I guarantee there’s someone out there who can relate – even if their story is slightly different. Looking into the eyes of someone “like you” can remove some of the dark feelings that come when you feel so alone or weird. It helps disarm fears and insecurities, and gives you the support you need to not only get through it, but to thrive in the midst of it.*

What to look for

Here are some warning signs for CRC>

These are symptoms of CRC when it is low in the bowel. Screening with a colonoscopy will find CRC higher in the large intestines.

If you have any of these symptoms, see your doctor. If your concerns are ignored, get a second opinion and keep going until you have been screened.

Danielle is the Director of Communication at Fight Colorectal Cancer.  She blogs at Semicolon Stories and has numerous articles in the Huffington Post.