Navigation Menu
Home » Blog » Myth Buster: “We use only 10% of our brains” [Infographic]

Myth Buster: “We use only 10% of our brains” [Infographic] 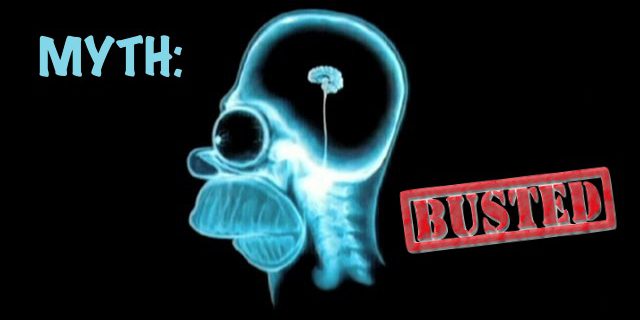 Thankfully this is a myth.   We use most, if not all, of our brains.   Many studies have shown that if the input to a particular neural system is eliminated, then neurons in this system will not function properly. This has been shown quite dramatically in the visual system: complete loss of vision will occur if visual information is prevented from stimulating the eyes (and brain) early in development. It seems reasonable to suggest that if 90% of the brain was not used, then many neural pathways would degenerate. However, this does not seem to be the case.

Recent research published in the Journal of Aging Research suggests that physical exercise may impact the brain in wonderful ways.  In the study, women between the age 70 and 80 who reported that memory loss, were randomly assigned to 3 different groups.  Over a six month period, one group did resistance training, another group did aerobic exercise and the control group did balance and tone training.  All three groups were tested for verbal memory and spatial memory both before and after their 6-month, twice weekly interventions.  When compared, both the women in the resistance training and the aerobics training groups had improved scores on the memory tests as compared to those who were only doing balance and toning.

Being fit seems to affect the brains of adolescents as well.  Researchers are using MRI to observe the functioning of the brains of adolescents (published April 2013 in the Journal of Cognitive Neuroscience).  They found differences in brain activity when comparing adolescent boys who exercise one hour or less a week (low-fit teens) to those who exercise 10 hours a week (hi-fit teens).  The hi-fit teens brains performed as expected, creating new memories by using their prefrontal cortex and hippocampus and at the same time other areas of the brain are deactivated.  Yet in the lo-fit teens, the other areas were not deactivated.  In fact, their brains needed more resources to make memories and remember.

In general, increasing amount of research suggests that our brain is developed and is maintained by “exercising” it. Mental fitness, like general physical fitness, is therefore something worth developing and maintaining. Exercising the brain appears to be particularly beneficial at young age, adolescence, and at older age. While it’s not yet conclusive, growing amount of research suggests that active and healthy lifestyles, that include mental and social activity, may reduce risk or delay Alzheimer’s or dementia (learn more here and here).

For some more interesting facts about your brain, check out this Infographic: