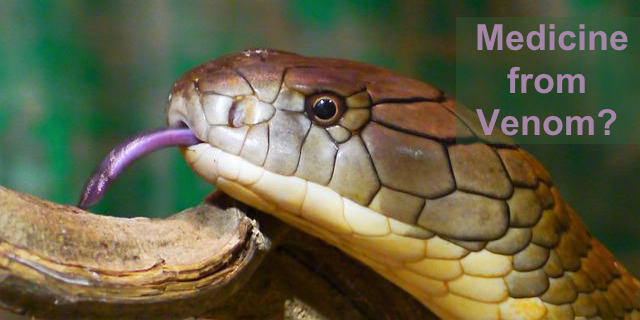 Looking at other animals, reptiles, and insects with suspicion these days?  Despite the fact that the actual origins of the COVID-19 virus are still unknown, bats and the endangered pangolin were maligned as possible sources. We do know that the monkeypox virus originated in laboratory monkeys in 1958. To balance the bad publicity, there is also good news from the animal kingdom:  New drug discoveries originate in the biology of other living beings, including disliked species such as snakes, insects, scorpions, spiders, and even stinging coral.

Normally we don’t think there’s a positive side to stings and venom. However, they’re powerful in small quantities, act rapidly, and have very specific targets – the same properties that are desirable in medications. Scientists attribute the power and specificity of snake venoms, for example, to the fact that snakes have been evolving for over 54 million years, with the venom evolving to target the prey’s biological vulnerabilities.

The toxins in venom consist of complex and unique proteins. As with other drugs that emerge from nature, scientists seek to identify the active properties of the proteins, and modify them to keep the desired actions and decouple the toxic effects. The study of the proteins in venom – called venomics – is rapidly advancing thanks to continuous improvement  in computational power and in genetic sequencing techniques.1,2

Some recent discoveries have promising properties for drug development:

Anticancer properties of soft coral:  In 1998, eleutherobin, a chemical found in a rare soft coral, was found to have anticarcinogenic properties. Human colon cancer cells exposed to eleutherobin stopped dividing. The problem lay in isolating enough of the compound to support wider research without damaging marine ecology.  This spring, scientists at the University of Utah found the compound in a common soft coral off the coast of Florida.  Advantages in venomics enabled them to isolate the relevant gene sequence from the coral DNA relatively rapidly. They were then able to take the first steps for synthesizing eleutherobin independently of the coral. Because of this study, a promising compound discovered almost 25 years ago has catapulted forward into the possibility of widespread research and manufacture. 3

Insulin and cone snails:  Cone snails paralyze fish by injecting them with a form of insulin that causes hypoglycemic shock (a rapid decrease in blood sugar). This spring, another scientific team used cryo-electron microscopy (cryo-EM) and protein engineering to study how a fast-acting cone snail insulin interacts with the human insulin receptor (IR).4 Cone snail insulin is a promising source of information to improve human insulin because of its swift bioactivity; where human insulin is a cluster of six insulin molecules that must separate to become active, snail insulin is a single molecule. Developing a simpler effective insulin could help combat the rising costs of insulin replacement therapy.5

Bee venom and breast cancer: Despite decades of research, it has been difficult to isolate the key components and mechanisms that activate bee venom. A study in 2020 revealed that a major component of bee venom, melittin, induced cell death in triple-negative and HER2-enriched breast cancer subtypes by suppressing the activation of EGFR and HER2 receptors. The authors concluded that their research “…unveils a molecular mechanism underpinning the anticancer selectivity of melittin, and outlines treatment strategies to target aggressive breast cancers.”

Approved Drugs: The FDA has approved 11 toxin-based molecules for use as therapeutic drugs.6 Here are the drugs and their origins:

Benefit of continued biodiversity: Despite our collective ill-will toward creatures that bite and sting, biodiversity is a pharmacopeia of knowledge that can only reveal more cures as we study its genetic mechanisms. Perhaps we should defend stinging creatures, paradoxically, for health reasons.

Image by Peter Kraayvanger from Pixabay