The Unappreciated Sense of Smell 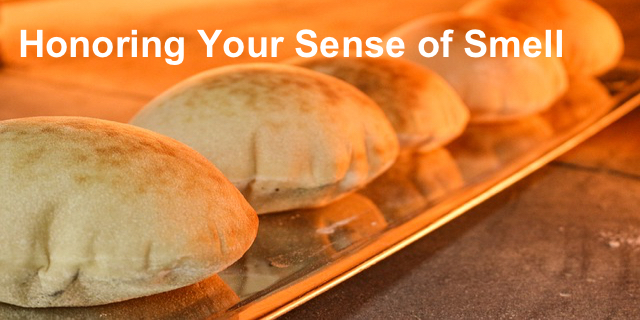 The homey aroma of fresh baked bread, the mouth-watering fragrance of chocolate chip cookies just out of the oven, the loamy scent of autumnal leaves raked into high piles: cells in our noses snatch chemicals in the air which fire neurons in a part of the brain called the olfactory bulb. From the bulb information zips to other areas of the brain. The scents are associated with data gathered by other sensory organs, synthesized with memories and emotions. For me, these scents conjure up a quiet Saturday from childhood.

There is a myth that for humans the sense of smell is our weakest sense and that it is significantly weak compared to other mammals. According to a Rutgers University professor, Paul Broca, a neuroanatomist from the 19th century, is responsible for this myth.

Broca compared the olfactory bulb of humans in relation to our brain size to other mammals olfactory bulbs and brain sizes. This comparison— measurements by ruler and weight—was used to formulate his thesis. By these measures, he found the human olfactory system wanting. His idea was bolstered by the belief that the enlarged frontal lobe of the human brain allowed human’s free will at the expense of the loss of the sense of smell. Freud took this idea and decided that the comparative smaller size of the olfactory bulb made humans more susceptible to mental illness – a very unfortunate extrapolation on Freud’s part.

These fallacious ideas have since been debunked. In fact, the human olfactory system “is generally similar in its neurobiology and sensory capabilities” to other mammals. In fact, instead of the limited number of 10,000 odors that we have been taught in school, researchers estimate that the number of odors that can be discriminated by the human nose at close to one trillion.

The loss of the sense of smell is an early symptom of Parkinson’s Disease, Alzheimer’s Disease and other neurodegenerative diseases. It is also a symptom of COVID-19.

Viruses are the most common cause of losing the ability to smell or having anosmia. According to research done thus far, the ability to smell comes back within two to four weeks after being sick with COVID-19. There are around 25% who have lost their sense of smell for longer.

Here is a video done by Penn State University on recent research around COVID-19 and the loss of smell.