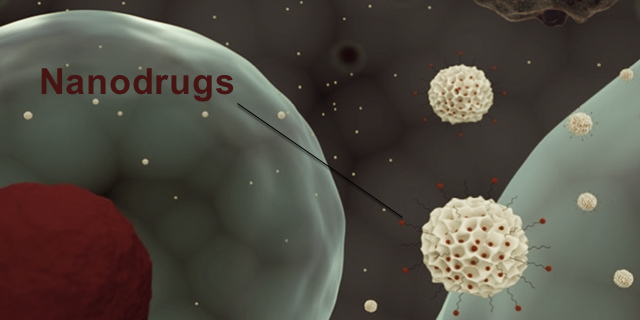 Nanodrugs have been around for some time. In fact, over 250 drugs using nanotechnology that  have been approved by the FDA and are in clinical use. 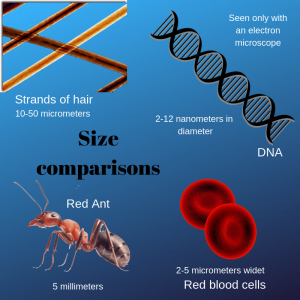 medication. A nano is very tiny: nanoparticles are between 1 and 100 nanometers in at least one of its dimensions. It is about a thousand times smaller than any cell inside our body. What that means is they can only be seen with an electron microscope.

Doxil is the first cancer drug, invented in Israel, that uses nanotechnology to carry the chemotherapeutic drug doxorubicin. The nanotechnology helps to target the tumor more effectively than just doxorubicin alone and it also reduces the terrible side effects of doxorubicin.

There are several types of nanoparticles that have been developed. One, called liposomes, was first described in the 1960s. Liposomes are spherical “vesicles” that hold the medication inside. They are made up of phospholipids, very interesting molecules with a hydrophobic end that repels water and a hydrophilic end that attracts water. 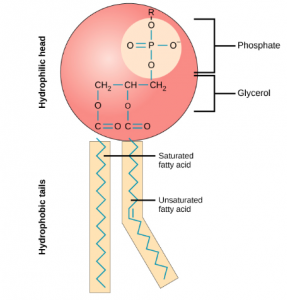 This structure makes them able to form borders or membranes separating what is inside from what is outside, especially when they create bi-layers. 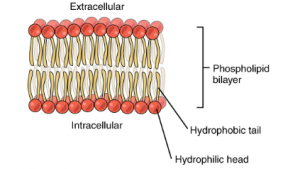 They create the membranes of cells and they are also used to build liposomes. 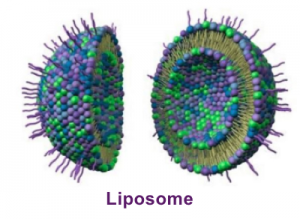 The small size of these particles makes them ideal for circumventing some of the body’s protective and cleansing mechanisms. For example, they are small enough to avoid being eliminated by the kidneys. In addition they can be created to target certain tissues. And the smaller sized liposomes, those around 15 nanometers, are created to breach the blood brain barrier.

Nanoparticles are being used to treat osteoarthritis. The particles are injected into the joint and act as lubricants for the  joint.  Nanoparticles are not only carrying medicine but also can carry protein factories. P53, called the guardian of the genome, is a tumor suppressor gene. We inherit a 2 copies, one from each parent. However, elephants have  40 copies of p53 and they rarely get cancer. Avi Schroeder is working to determine if nanoparticles can carry elephant p53 to kill cancer cells. Here is an image of pancreatic cancer cells introduced with elephant p53.

Bridging the blood brain barrier (bbb) using nanoparticles is being done to try to address glioblastomas and other brain cancers but also Parkinson’s Disease. This barriers is made up of  endothelial cells which have negatively charged cell membranes. By making the nanoparticles surfaces positively charged, they are more likely to be absorbed.  There is also work in the production of biocompatible metal nanoparticles as delivery systems and grants by the Michael J. Fox Foundation to find a way to deliver GDNF to reverse Parkinson’s Disease.

Here is a TED talk discussing the development of a nanoparticle for cancer treatment.