Nobody Ever Knocked on the Pipes - Medivizor
SIGN IN

Navigation Menu
Home » Blog » Nobody Ever Knocked on the Pipes

Nobody Ever Knocked on the Pipes 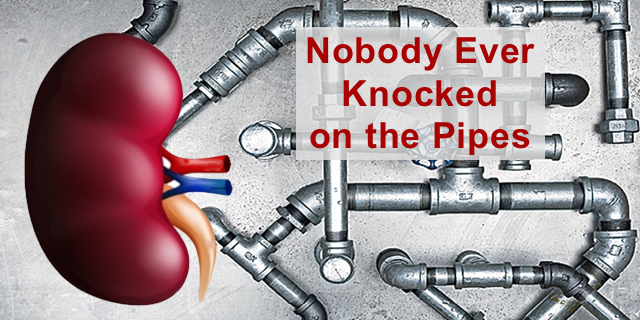 Warning: The story below contains references to unpleasant subjects, including carsickness, infection, and a suffering kidney, and may not be suitable for all readers.

My friend Andy and I were rolling down the highway in my little red car on the way to Virginia. Andy supplied the snacks and 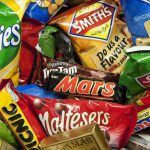 the selection of music. Because Andy believes snacks for a road trip should look like you sent an eight-year-old into the 7-Eleven with a hundred dollar bill, I’d brought along 2 entrée salads in self defense. Not refrigerated – I’m not fussy.

We were going to visit college friends for the weekend, people we loved but hadn’t seen in years and years. These sweethearts live on a family farm, surrounded by pastures and show ponies, are tremendously funny, and make peach pies that they serve you in enormous slices.

A day into this visit of beautiful weather, lively conversation, and losing my best eyeglasses, I started to feel unwell. I felt nauseated, as if I had a case of delayed carsickness. I hadn’t eaten enough peanut butter M&Ms on the way to explain this, and I was irritated. Then it occurred to me –might have been my salad. Great. I gave myself food poisoning with my own health food. That’s what I attributed it to. But the salads had tasted fine. I wasn’t sure.

My own family is full of robust and stoic Scotsmen, and it goes against our pride to admit to something as mundane as “not feeling so good.” No profound headache and dangerously touchy stomach were going to keep me from having a good time. I decided to pretend I was fine. That night I lay uncomfortably awake, waiting for the very unpleasant consequences of food poisoning. 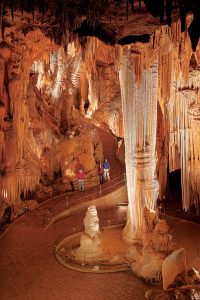 The morning wasn’t any better. It is hard to make believe you’re fine when you are green to the gills, not contributing to the conversation, and keeping your eyes closed a lot. I thought I was doing all right until we bought tickets to tour the Luray Caverns. It was humid underground and hot outside. I rapidly excused myself and spent an hour and a half sitting absolutely stock still in a chair in the lobby while everyone else saw the caverns. But I’m no quitter. I carried on during lunch by putting my head on the table.

Willing myself to think, “This can’t last THAT long” was not working, as by Sunday morning, time to leave for a long car ride, I’d thrown up twice and still felt awful. I took Dramamine, and Andy drove. Over the course of the day, felt increasingly better. I had dinner. I wondered what that horrible virus/food poisoning had been, other than really badly timed.

I felt normal the next morning, too, and was out running errands when my forearms began to shake. I thought, “This is not good. I’d better go home.” I started seeing double about a quarter mile from my medical provider’s office. I closed one eye, made it to the parking lot, staggered in, and said, “I don’t feel so good.” I got taken to the Emergency Room.

Now. I have a history of urinary tract infections (UTI) that stretches back decades. For the past nine years, I’d been going to the same HMO. If you looked at my records, you’d see that the only time I went to the doctor’s was when I had another UTI. I’d have a couple a year. I was a repeat offender. My records read, “UTI, UTI, UTI, mammogram, UTI, UTI.”

The symptoms of a UTI are commonly “frequency, urgency, and a burning sensation.” I get none of those. I just know I have one.  I walk in, say, “I have a UTI.” They test me and say, “yes you do.” They send me on my way with a prescription, advice to drink more water than coffee, and instructions on the proper direction to use toilet paper on female anatomy. I believe them about the coffee. At my age, I think I’ve mastered toilet paper.

In that entire time, it seems that nobody had looked at my chart, said, “Hmm, I wonder why this patient gets UTIs so often.” (Evidently they conclude it must have something to do with toilet paper.) Only once was I sent to a urologist for a bladder scan to see if my plumbing met code, which it did. 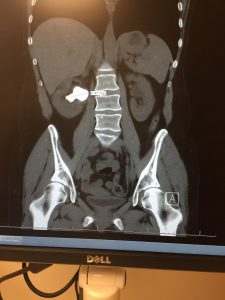 At the ER, they gave me a head to toe CT scan. What I had, aside from another UTI, was a kidney stone.

Kidney stones are usually little tiny rocks that you become aware of because they are blocking the pipes. Mine was as big as my fist. It took up the entire interior of my right kidney. It must have been growing there for years. Right now, it was doing nothing but harboring and manufacturing tons of e.coli bacteria. Evidently it had finally gotten around to poisoning me.

They gave me a big dose of antibiotics along with a prescription for lots more, and my dear husband got me home. I was
referred to a great surgeon, who had to go inside my kidney and break the stone into pieces in order to extract them. She 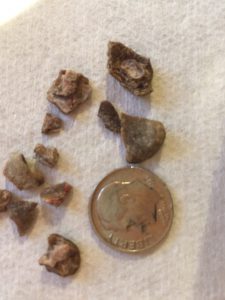 said afterwards, “I got enough gravel out of you to pave a driveway.”

I asked her for a trophy for having the Biggest Kidney Stone Ever, and she said no. She wouldn’t even give me a prize for having the biggest one this year. However, before I went into the operating room, I’d convinced her to save some chunks for me as souvenirs, which she did. I show them to the stout-hearted, right after they tell me no, they do not want to see them.

Now, I feel fine. I also drink a lot of water.

*Peigi Chace is a freelance writer living in New Hampshire with her husband and pet chickens.