Ending the year with Music #2 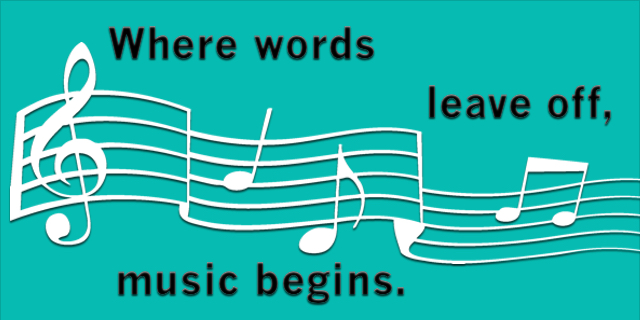 We ended last year with music and asked for suggestions of music from our readers. This year, we thought it would be fun to share last year’s recommendations.  But first, watch this TedTalk from 2008 called “The transformative power of classical music.”

Recommendations from our readers

Last year  Michael Hadley commented, “Somewhere in Beethoven’s 5th and 6th symphonies, I float into a trance, and come out the other side feeling more peaceful and relaxed.”

Music is a higher revelation than all wisdom and philosophy. ~ Ludvig von Beethoven

Anita Misra-Press recommended Enya. “I listen to Enya, reminds me of new beginnings, probably as I listened to her music when I gave birth to my children decades ago.”

“Music expresses that which cannot be said and on which it is impossible to be silent.” ~Victor Hugo

IVM wrote, “I like to listen to Galician music, such as Milladoiro, Luar na Lubre, Berrogüetto, Carlos Nunes…”

“Music is the universal language of mankind.”~Henry Wadsworth Longfellow

Vickie Wilkerson wanted us to know, “I listen to “Skin” by Sixx A.M. It reminds me that even though I’m battling my issues I am more than my skin.”

“Music became a healer for me.” ~Eric Clapton

“Music washes away from the soul the dust of everyday life.” ~Berthold Auerbach

I listened, motionless and still; And, as I mounted up the hill, the music in my heart I bore, Long after it was heard no more.~William Wordsworth”

What music do you listen to? What music is healing for you? Let us know in the comments below.