As we want to personally help you, please let us know how we can and we will get back to you.

Here comes the notification
X
< Back 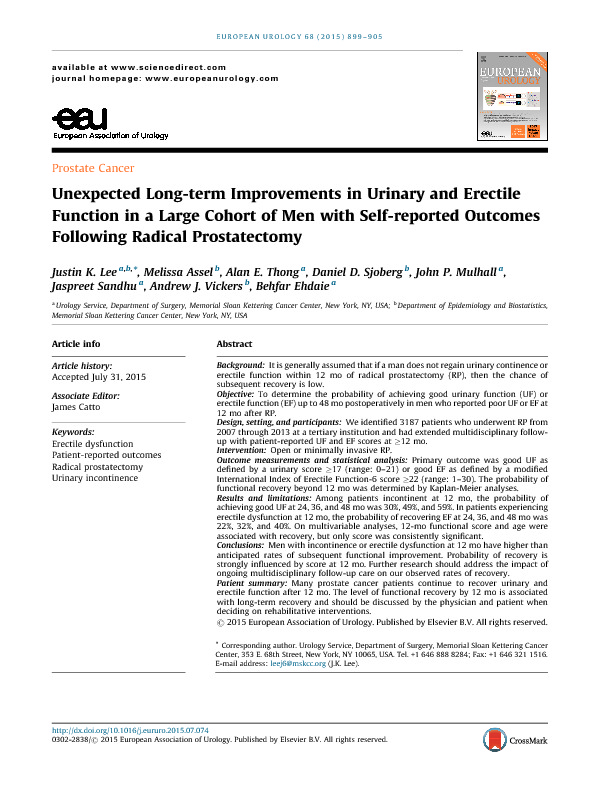 Last we checked (May 22, 2022), this item costs $35.95 (+tax) by its publisher: European Urology. In order to purchase this item, please visit the publisher's website

Self-healing? Improvements in erectile and urinary function after prostatectomy

This study looked at the possibility of long-term improvements in urinary function or erectile function after prostate gland removal (radical prostatectomy).

Radical prostatectomy (RP) is the most common treatment for prostate cancer, but this treatment can cause urinary and erectile problems.  A common assumption has been that if urinary function or erectile function was not regained within 12 months of RP, then the chance of recovery was very low. However, it is not clear from previous research whether or not this assumption is true.

The current study examined whether erectile and urinary function improved in the long-term following RP.

The study involved 800 patients who reported urinary dysfunction 12 months following RP, and 1003 patients who reported erectile dysfunction. Each patient completed a standardized survey around 12 months after the RP, and then again around 24 months, 36 months and 48 months. The patients rated their urinary function or erectile function each time using a scoring method designed to measure quality of life.

The probability of recovery for both urinary function and erectile function was significantly influenced by the level of functionality at 12 months after RP.

This study focused on subjects from one institution only. The standard of follow-up care in institutions is likely to differ and affect outcomes.

If you are experiencing urinary or erectile problems following RP, you should discuss this with your doctor to help make decisions on the best rehabilitation care for you.

Disclaimer:
This information should not be relied upon as a substitute for personal medical advice, diagnosis or treatment. Use the information provided by Medivizor solely at your own risk. Medivizor makes no warranties or representations as to the accuracy of information provided herein. If you have any concerns about your health, please consult a physician.

Discussion about this item

Thanks for the feedback - we’re glad you found this item useful!

Do you know anyone else coping with who might find Medivizor useful?

You can discuss this item with other users. Before entering the discussion, please let us know if the item seems helpful by clicking 'Helpful?' and submitting your response. We appreciate it and it helps Medivizor tune it's system to get you more relevant and helpful information.
OK

Know anyone else who might find this item useful?

Thank you for contributing to the discussion!