Another Use for 3-D Printing: Pulmonary Stents
SIGN IN

Another Use for 3-D Printing: Pulmonary Stents I have yet to see a 3-D printer but apparently you can buy a portable one for around $500. The 3-D printer has been around since the 1980’s. Working from a three dimensional drawing done in a computer program called CAD, the printer lays down with a spraying nozzle layer upon layer of liquified plastics called thermoplastics which melt when heated and become solid when cooled. Sintering is the name for the process of melting the plastics and fusing the layers together.

Used in manufacturing first for fast development of models, or prototypes, 3-D printing is now part of the medical field. One of the first uses for 3-D printing has been prosthetics. These prosthetics are not as durable (at this point) as other prosthetics but because they are less expensive, they are especially useful for children. Their reduced cost allows them to be replaced as children grow and play and they can be created with a bit of “personality” as can be seen in the video below.1

In a blog post Bladders and New Technology I wrote about the evolving field of bioprinting or using 3-D printing to help create organs of the human body (another word for this is “regenerative medicine”). A recent study published in Science describes more of this type of work done at the University of Washington and Rice University. They used another 3-D process from the 1980’s, “projection stereolithography,” which can create layers in seconds rather than in minutes. This speed allowed the researchers to implant live cells into the scaffolding with more of a chance of survival. In one part of their study, they implanted artificial liver tissue into mice who had chronic liver failure. The tissue survived in the mice and performed one of the functions of livers in the body. In another study working with the air sacs of the lungs, the team was able to create vasculature that could actually exchange oxygen and carbon dioxide between blood cells and the epithelial cells of these air sacs. Creating the complex blood vessel structures of organs is a hurdle that researchers attempting to provide replacement organs have faced.2

The researchers have made their information open source – meaning available to all on the internet and they have a start-up company called Volumetric which sells bioprinters and other materials to researchers who are interested in doing this work.3 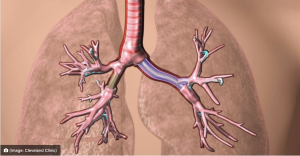 In the meantime, bioprinting is moving further with FDA approval of patient specific bioprinted pulmonary stents. Pulmonary stents are used to keep bronchia and smaller bronchioles open. Tumors, inflammations and trauma can compress airways. Pulmonologists have used stents to keep these passage ways open but the stents that are available often don’t fit well. Extra complications arise, like stents bending or mucus building up leading to lung tissue dying. Using CT scans to create the 3-D drawing to work from, a pulmonologist at Cleveland Clinic used medical grade silicon to create stents that are personalized. For the patient, the benefit of having a stent that can last a year, instead of a few months, obviously reduces the number of surgeries/procedures that the patient must endure.