Navigation Menu
Home » Blog » What Is a Normal Temperature?

What Is a Normal Temperature?

I don’t know about you, but 98.6 degrees Fahrenheit (or 37 degrees Celsius) is the temperature I’ve always been told is normal. I never knew from where this figure came.

A new review and analysis of historical data of human temperatures may help us understand and possibly rethink what we now consider a normal temperature.

A Little History of Clinical Thermometry

How did the thermometer come into use in the clinical setting and how did the generally accepted idea that 98.6 degrees Fahrenheit (or 37 degrees Celsius) is normal or means that the person does not have a fever? Gabriel Daniel Fahrenheit perfected 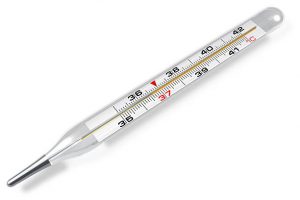 the mercury filled glass thermometer and the scale named after him in 1714. But efforts to create a thermometer date back to the first or second century BC. Galileo in 1592 added a scale to his air filled thermometer. A contemporary of Galileo, Sanctorius, was the first to use the thermometer in a clinical setting.

But Carl Reingold August Wunderlich is called the father of clinical thermometry. In 1868, he published a book in which he set down his observations from a period of over 18 years in which he took millions of temperatures from 25,000 people. Using axillary (or under the arm) temperature, Wunderlich observed that “. . when the organism [man] is
in a normal condition, the general temperature of the body maintains itself at the physiologic point: 37 C = 98.6 F.” The upper limit of his normal temperature range was 100.4 degrees F or 38 degrees C and from this he stated that anything over 100.4 degrees F is a fever.1

Since Wunderlich there have been other studies. Recent studies have found the average normal temperature to be less than 98.6 F or 37 C. For example one analysis of 250,000 temperature readings from 35,000 patients gave an average normal of 36.6 C or 97.8 F.

Is this temperature difference caused by the way that the temperatures were taken – oral versus axillary measurement? Does it have to do with something else? Does it matter?

A just published study analyzed almost 700,000 body temperatures from three different groups of people measured between 1862 and 1930, between 1971 and 1975, and obtained between 2007 and 2017. The study found that men in the 1800s had temperatures that were .59 degrees C higher than today and women had temperatures of .32 degrees C higher than today. By comparing the two newest cohorts, 1971-1975 and 2007-2017, they were able to rule out the differences in thermometers as a reason for this change.

The researchers suggested that improved health may have lessened chronic inflammation since the late 1800s. Improvements in heating and cooling systems which keep the temperatures more constant may also be part of the reason for the changes.

So if you notice that you run cool or have a normal temperature that is lower than 98.6 degrees F, you are actually more “normal” than you think. Today, it seems that 97.5 is a more appropriate normal temperature.2