What is Usher Syndrome? 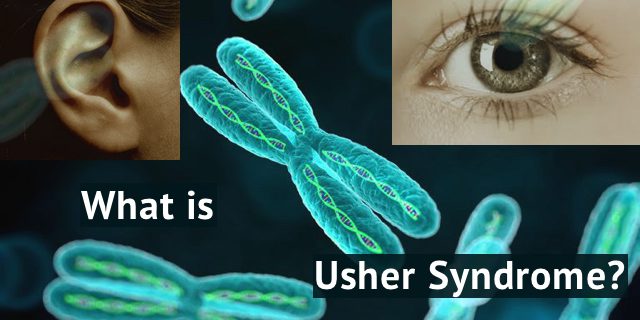 “My son’s deafness was “cured” by early cochlear implants but there is as yet no known treatment for the loss of peripheral vision, nor any way to predict the rate of progression. Literally, the only approved intervention is learn to use braille and a white cane – a folding stick with no light, no tech, no audio, no google maps directions….” ~Stacey Ashlund, parent activist

[Usher syndrome] “is a cruel disorder robbing [my sister] of both her vision and her hearing.” ~Peter Alexander, NBC News 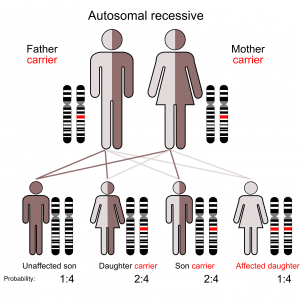 that both women and men can have the disorder and both sexes can pass it to their children.  Since it is recessive, people can be carriers and have no symptoms.  But if two carriers have children, there is a one in four chance that their child will have the syndrome.

Around 4 babies out of 100,000 are born with Usher syndrome.  It affects hearing, sight and balance. Sight loss is caused by retinitis pigmentosa (RP), a condition in which the retina deteriorates. The person first begins to lose their night vision, then their peripheral vision. Eventually they may, depending on their type, lose their sight completely.

There are three types of Usher syndrome, types 1, 2, and 3 which differ in severity and affected genes.

A child with type 1 Usher syndrome is born profoundly deaf.  Their balance is affected and they lose their sight earlier than in other types. Usually their night vision has decreased before they are 10.

Those with type 2 Usher syndrome are born with moderate to severe hearing loss, however their balance is normal. They begin to lose their night vision in their teens.

Children with type 3 have normal hearing at birth but progressively lose their hearing during their later  childhood or the beginning of their teenage years. They have normal or near-normal balance but may experience problems later in life. Their vision loss varies but often begins during their teens.

According to Gallup, vision loss is the third most feared condition, after cancer and AIDS.  A 2016 survey on public attitudes to eye health asked about the consequences of blindness. The top concerns were quality of life and loss of independence. It is not surprising that the public is concerned. According to the National Federation of the Blind, 70% of working age adults who are blind are unemployed.

Increasing awareness is an uphill struggle. As Stacey Ashlund, Family and Friends Coordinator for Usher1F and parent of a son with Usher syndrome said, “No one famous enough has the disease yet – which is a sad way to determine funding.”  But there are people trying to bring light to this devastating condition.

After his daughter’s diagnosis of type 1 Usher syndrome, Jack LaCourse read the statistics and felt he 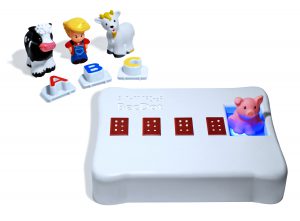 needed to do something.   At the consumer electronics show in January 2018, LaCourse was named a “Not Impossible Award Winner” for his invention of the BecDot, an educational toy to teach toddlers pre-braille concepts.

He and his wife are interested in traveling to help Rebecca see as much of the world as possible before she loses her sight. They also have a campaign called “Memories For Rebecca” which asks people to provide images of places they have visited.  According to their blog post, “We would like her to see the world through all of you.  We are interested in photos of places that you have visited and that you feel are must see places.”[Check out https://memoriesforbecca.com/memories-campaign/]

Another activist in the news is Rebecca Alexander, sister of  NBC White House correspondent, Peter Alexander, has type 3 Usher syndrome. To increase awareness, he took the How Eye See It Challenge.

The Usher Coalition connects families around the world to support each other.  Although it doesn’t directly fund research, it sponsors yearly conferences for researchers and families to learn from each other and to connect researchers to stimulate worldwide collaboration. The website features a podcast of research and community stories as well as an international Usher syndrome registry.

Like many rare diseases, funding for research has been incremental at best.  But another parent group is trying to push research forward.  Usher1F.org is an organization that directly funds research of a particular type of Usher syndrome.  As Ashlund explains, “We are fundraising for medical research in hopes of one day finding a cure for this blindness due to RP.”

*”Electroretinography: A test in which the electrical potentials generated by the retina of the eye are measured when the retina is stimulated by light.”