Rescue During Sudden Cardiac Arrest and the Myth of Tongue-Swallowing 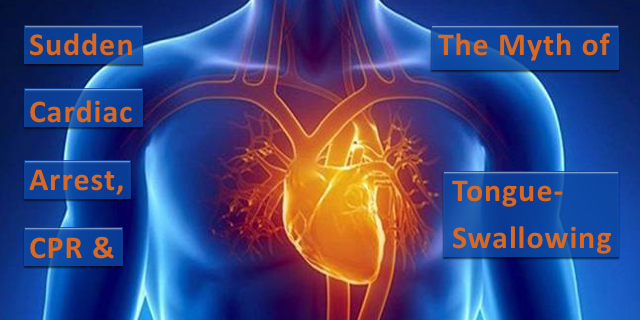 A-B-C – the beginning of the alphabet, a song by the Jackson 5 or the acronym that anyone who took CPR (coronary pulmonary resuscitation) before 2010 learned means Airway, Breathing, Chest Compression.

I just learned that this CPR acronym is out-of-date.  Before 2010 I learned

The change is due to a new way of thinking about Sudden Circulatory Arrest also called Sudden Cardiac Arrest (SCA).  Now when someone collapses, we assume that they are having a sudden circulatory arrest.  An SCA is different from a heart attack.  A heart attack occurs because of a blockage in the arteries feeding the heart muscle.  An SCA has to do with the heart’s electrical system.

The heart beats regularly because of its electrical system.  Described in 5 Things You Probably Didn’t Know About Atrial Fibrillation & Why You Should Care, the sinoatrial (SA) node sends electrical pulses out to the muscle of the heart causing it to contract in a specific pattern.  Sometimes, people get arrhythmias where their heart beats too fast or too slow or irregularly.  An SCA occurs when the heart suddenly stops beating.  This can happen to people who have heart disease but it also occurs in people who are healthy.

In fact, a recent study published in Heart Rhythm Journal looks at SCAs that occur in athletes and how people respond to these events.  The researchers reviewed 28 videos available on YouTube of SCAs that happened during athletic events around the world between 1990 and 2017.  Disturbingly, in all of the videos, the first people to approach the athlete were fellow teammates, none of whom conducted CPR on the fallen athlete.  And in 26 of the 28 videos,  the first actions of the rescuers were efforts to prevent “tongue-swallowing.”  Below is one of these videos.

Let’s be clear…there is no way to swallow your tongue.  This myth is pervasive in our culture.  If you see someone have a seizure or suddenly collapse, they are not going to swallow their tongue.  You do not put anything in their mouths, you do not need to pull on their tongues.

In the videos that were reviewed, there were 17 in which a cardiac arrest occurred.  In 15 of those 17 events, the videos show team medical professionals opening the mouths of the athlete and sticking their fingers into their mouths to prevent tongue-swallowing.  This does not help the victim at all.

And yet, researchers reviewed the media after a SCA event and found that news articles praised teammates and medical staff for preventing victims from swallowing their tongues.

What Should You Do?

If an adult collapses, you ask 2 questions:  1) Is the person conscious? and 2) Are they breathing normally?  If the answer to both questions is NO, you start CPR using the C-A-B method.

The change to C-A-B for an adult who has lost consciousness and is not breathing properly has to do with recent discoveries.  First, in someone who has been breathing normally, there is already oxygen in the blood that can be used to supply the heart and brain for several minutes.  The important thing is to get that oxygen around the body.  That’s why it’s recommended that chest compression start as soon as possible.   The compressions are also supposed to be faster and more forceful than previously recommended-100 compressions per minute.

The prior to 2010 CPR routine, compression is stopped for the rescue breaths to be administered.  Yet setting up and performing mouth-to-mouth resuscitation can delay compression, thus losing valuable time.  Apparently, if compression is done first, the victim gains time: as much as 30 seconds.  These seconds are enough to save a life.

For near-drowning or rescuing children, you still use the A-B-C approach.

Below is a video by the American Heart Association demonstrating CPR using the C-A-B approach.