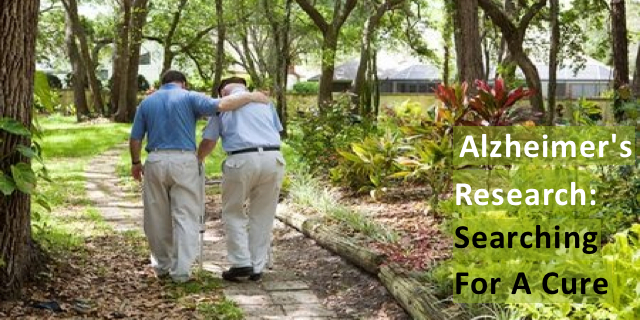 Your brain is made up of neurons, glial cells–structural cells that protect neurons (astrocytes are one type)– and blood vessels made up 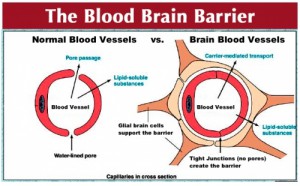 of endothelial cells and muscle cells called pericytes.    The brain requires a significant amount of  oxygen and nutrients so it is fed by over 100 billion capillaries.   To protect the brain from foreign matter, astrocytes, pericytes and endothelium form a complex physical barrier called the blood-brain barrier.

Although it is an important shield, when trying to create medications to treat the brain, the BBB is troubling, keeping out “∼100% of large-molecule neurotherapeutics and more than 98% of all small-molecule drugs.”  A piece of recent research is giving hope to people dealing with the brain disorder, Alzheimer’s.

The cerebrum, the largest section of the brain, is responsible for thinking, perceiving, understanding language and producing language. It is covered with wrinkles. This wrinkled surface is called the cortex and research has identified it as the place where most information processing occurs.  Planning, solving problems and storing memories are all done in these folds.  Most of the surface of the cerebrum is hidden in the wrinkles or folds; you see only about a 1/3 of the surface area.

What happens with Alzheimer’s disease?  Alzheimer’s is characterized by neuron (nerve cell) death. The cortex of people with advanced Alzheimer’s contracts, the size of the hippocampus (which is responsible for forming new memories) is significantly reduced and the ventricles (fluid-filled spaces in the brain) grow larger.

Microscopic analysis of brains affected by Alzheimer’s reveals plaques, which are clusters of protein fragments, around nerve cells and tangles, twisted protein found inside dead and dying nerve cells. 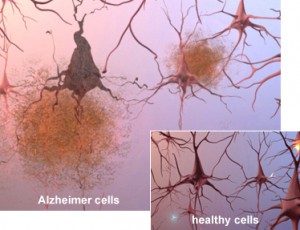 Plaques have been analyzed further.  They are made up of sticky protein fragments called beta-amyloid.  Not only do they clump, but they also interfere with cell communication and activate the immune system.  Inflammation occurs.

Tau is the protein that supports microtubules in the nerves.  Those microtubules keep nutrients and other essential supplies moving through cells.  In people with Alzheimer’s tau collapses into tangles, which destroys the microtubules and nerve cell death follows.

Below is a video which explains the process of tangle and plaque formation, the key components of this devastating disease.

As described above, getting past the blood brain barrier has been a challenge for much of neuropharmacology.  However, a recent study in Nature describes a treatment in clinical trial that may show promise.

It uses immunotherapy, like that described in Medivizor’s recent post on immunotherapy and cancer.  In this case, an antibody called aducanumab, has been created to target the beta-amyloids that make up plaques.  The treatment is in Phase 1 trials–the clinical trial phase that looks at safety of treatments.  The research, done as a double-blind, placebo-control randomized trial (see this post for more on this type of case-control randomized study), shows that as the dosage of aducanumab increased, the amount of plaques as seen on PET scan decreased.

Of the 165 patients that started in the year long study, 125 completed it.  Each month they received an infusion of the antibody or a placebo.

Here are representative photos of the PET scans from the article published in Nature. 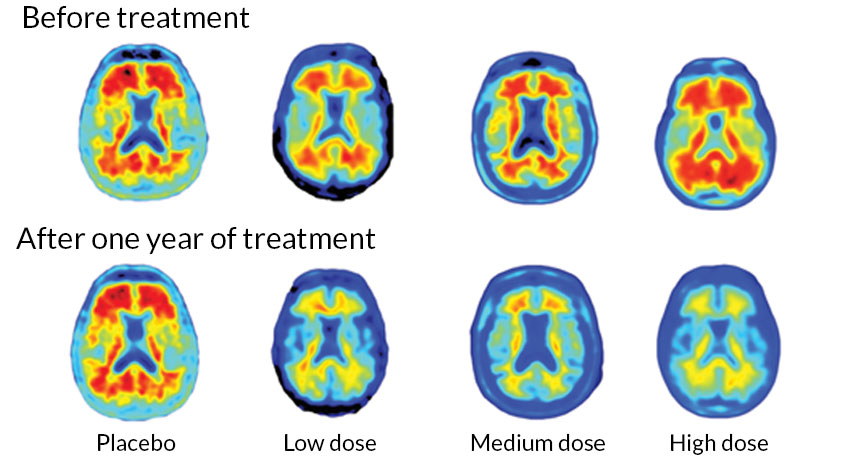 The red in the pictures above are the plaques.  As can be seen, the people who got the highest doses of the antibody had the greatest reduction in plaques.

Although the study was not designed to find out if the medication preserved memory or helped with processing, the research did find less cognitive decline in those being treated compared to those on the placebo.  The researchers stated that the change could be seen in PET scans as 6 months, but clinical effects were not apparent until after a year of treatment.

Unfortunately, many people left the study because of side effects.  One of the side effects that occurred in some patients was a change in the fluid levels in the brain called ARIA.

The news media has touted this research as a “breakthrough.”  As Medivizor suggests, taking early research results and making inflated statements is not the best approach to understanding.   This research, though it sounds promising, is actually a beginning, a first step. The next step in the research process is to involve more patients.  Larger numbers are needed to clarify clinical effects and to determine the most effective dosage with the fewest side effects.  Stay tuned with Medivizor for more results!