Navigation Menu
Home » Blog » What Do You Know About Tanning?

What Do You Know About Tanning? 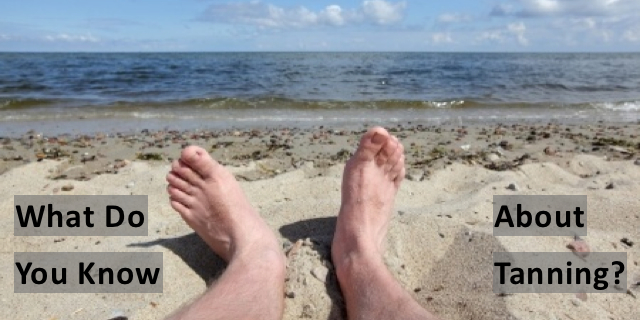 Have you heard or seen this myth about how a “base tan” protects you? It is present online and at your local tanning bed establishment (sometimes called “solarium”).  Here is the statement taken directly from the American Sun tanning Association,

“These two steps combine to create a powerful natural sunscreen that doesn’t wash off quickly. One benefit of indoor tanning is that trained operators can give a tanner controlled UV exposures to gradually develop this sunscreen – often called a “base tan” – while minimizing the risk of sunburn.” ** 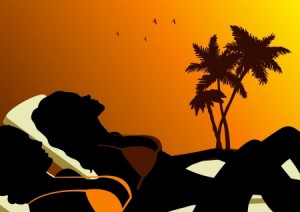 A “base tan” is your skin’s reaction to cancer causing UV radiation…a tan is your skin telling you that it has already been damaged. As the FDA states, “There is no such thing as a safe tan.”
In fact, the FDA goes further to state that,

“And, contrary to popular belief, getting a tan will not protect your skin from sunburn or other skin damage. The extra melanin in tanned skin provides a Sun Protection Factor (SPF) of about 2 to 4; far below the minimum recommended SPF of 15.” [emphasis added] The words “powerful natural sunscreen” used by sun tanning promoters is not correct.

What Happens to Your Skin When Exposed to UV Radiation?

Melanocytes are the cells that produce melanin, the dark substance (pigment) that colors our hair, eyes and skin. Research has shown that melanocytes absorb UV radiation and it damages the DNA.  In fact, it causes a type of damage in which the nucleic acids improperly attach to each other, creating what are called cyclobutane dimers (CPD), and bend the DNA.  Take a look at the post on DNA replication to understand the significance of this change. (https://medivizor.com/blog/2016/05/25/understanding-oncology-2016-dna/)

The creation of these CPDs starts with the UV exposure but then it continues for many hours after.  In fact, what is happening is that the energy of UV light is transferred to other cell’s DNA in the dark.  This process is called chemiexcitation and in the study, half of the melanocytes that were damaged had been damaged after exposure to UV light.

Below is a video that shows what is happening in your skin.

“No Tan Is Worth Dying For”

When Clare Oliver was just 26 years old,  she died of melanoma. She attributed her fatal illness to using tanning beds.

The “No tan is worth dying for” campaign resulted in the banning of tanning beds in six of the eight state and territories in Australia.

In the US, a mother, Donna Regen, @melanoma_mama has been making it her mission to stop indoor tanning.

Jaime was only 20 when she was diagnosed with melanoma. She died 9 years later in 2007.  As her mother writes, “I am not telling you her story to solicit sympathy but to make you aware of the torture that tanning beds and melanoma has caused our family and friends. I am telling you Jaime’s story because she can no longer do so … and it is a story you need to hear.”

Donna has reason to be concerned! A population based case-control study published March 2016, looked at young people (age 25 to 49) in Minnesota diagnosed with melanoma between 2004 and 2007 compared to controls (people not diagnosed). Women younger than 40 with melanoma, had started indoor tanning at a younger age and had had more sessions of indoor tanning. Regardless of their age, the more indoor tanning the women had done, the more likely they were to be diagnosed melanoma.

Some people think that they should tan to increase their bodies’ Vitamin D production. The American Academy of Dermatology states, “The American Academy of Dermatology (Academy) does not recommend getting vitamin D from sun exposure (natural) or indoor tanning (artificial) because ultraviolet (UV) radiation from the sun and tanning beds can lead to the development of skin cancer.” It is possible to get Vitamin D from foods like salmon, fortified orange juice, milk, yogurt, cheese and cereals that have been fortified. Plus there are vitamin supplements that are available.

The World Health Organization has named indoor tanning a class 1 carcinogen. States that have laws with age restrictions on the use of tanning beds have seen reductions in adolescents self-reported use of tanning beds. But shouldn’t more be done?

What do you think? Leave a comment to let us know

**Here is the link so you can see this yourself: http://tanresponsibly.com/base-tan/