Slip on a Shirt, Slop on Sunscreen, Slap on a Hat: Prevent Skin Cancer
SIGN IN

Slip on a Shirt, Slop on Sunscreen, Slap on a Hat: Prevent Skin Cancer 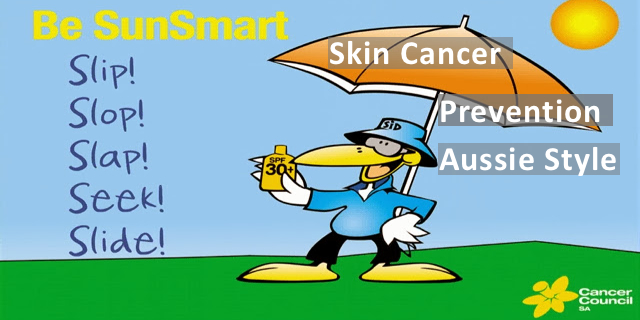 When you see a seagull, do you think sun safety? If you live in Australia, your answer would be yes!

Australia has the highest reported skin cancer rates in the world. The most common cancer in Australia’s 15 to 29 year old population is melanoma.

Since 1981, Sid has been teaching sun safety to our mates  “Down-Under.”   Significant progress has been made to reduce the incidences of basal cell carcinoma, squamous cell carcinoma and melanoma.

Over the years, Sid has changed his look and added a few more important sun safety tips to his repertoire.  Today he asks everyone to “Slip on a shirt, slop on sunscreen, slap on a hat, seek out the shade and slide on sunglasses.”  Sid even exhorts Australians to “pick up a spade and plant some shade.”

Australia’s government runs SunSmart. Beyond television, radio and social media campaigns, the government has created a SunSmart curriculum for their schools and mandated that schools reduce sun exposure for students and staff. In addition, tax incentives are in place for people who work outdoors including tax deductions on purchases of hats, sunglasses, sunscreen and protective clothing.
Researchers estimate that between 1988 and 2003, the SunSmart campaign has been responsible for preventing over 100,000 skin cancers (9,000 of these being melanomas). One hopeful trend has been a slowing in incidence and morbidity of skin cancer overall and a reversal of the trend in young people.

So this summer, be sure to follow Sid’s advice: Slip on a shirt, slop on that sunscreen, slap on a hat, seek out the shade and slide on sunglasses! Stay sun smart.