Cancer connected to glucose and microenvironments? 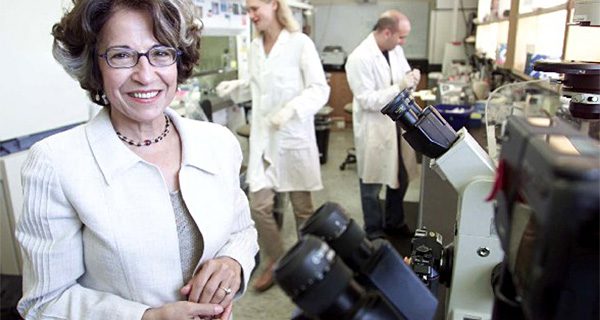 Why does nature repeat the same forms over and over again?  This is a question that has driven Dr. Mina Bissell‘s cancer research.

In a 2012  TED talk, Dr. Bissell spent 17 minutes summarizing decades of research–asking and answering unique questions that are toppling and evolving our understanding of cancer.

Her talk begins with a lesson in developmental genetics.  From a fertilized egg, we develop unique tissues that create organs and the rest of the human body.  There are between ten trillion and seventy trillion cells in the adult human body, and each one of those cells has the same genes as the fertilized egg.  Yet during development in the womb–elbows, noses and feet as well as the brain and the pancreas form.  Why is that?  How does this observation relate to cancer?

Thinking Outside the Box

Dr. Bissell’s answer is form and function.  When she began her research, and through much of her  career, the dominant cancer theory has been that there is a single cancer gene (oncogene) in a single cell that is sufficient to cause cancer. Dr. Bissell saw a conflict between  this theory and what she knew of developmental genetics.  So she did experiments.

To test this theory, she and her research team used a blue marker to mark an oncogene.  They put that oncogene in an embryo of a chicken.  They let the embryo develop naturally.  When they looked at the cells of the tissues, like in the developed embryo’s feathers, they found something very interesting.  The oncogene was found in the feathers but no cancer developed.

Yet, in a petri dish, the oncogene makes cancer.  The conclusion that Bissell drew was that “context and architecture” matter:  “The microenvironment and the context that surrounds the cells actually are telling the cancer gene and the cancer cell what to do,” Dr. Bissell stated.

Importance of the Microenvironment

This finding led to further research on the microenvironment of human tissue, specifically that of the breast.

What is the microenvironment?  This is the space around the cell or group of cells.  In that space there can be extracellular matrix or ECM which is a collection of molecules thought to provide support to cell groups.  There are also chemicals, nutrients and other cells in the microenvironment.

Bissell  looked at the acinus, which is the place where breast milk is made.  The acinus has an interesting structure, it looks like a little sack: a group of luminal epithelial cells (these are the cells that secrete milk) is held in place by myoepitheial cells and ECM (see diagram.)

Everyone thought that the ECM was inert–that it didn’t do anything but act as a scaffold or support for the acinus.  Dr. Bissell asked, “What if this ECM does something else?  What if it tells the nucleus of cells (where the genes are) what to do?”

With this information, the team got breast cancer cells (cancerous luminal epithelial and myoepithelial cells), put them in ECM to see if they could change those cells from cancerous to normal cells.  Guess what? The breast cancer cells changed back into normal, healthy breast tissue.  The ECM does something besides supporting and creating structure.  It actually organizes tissue and it tells the genes in cells what to do.  This microenvironmental element controls the growth of the cells and can regulate it so that it does not become cancerous.(<=Click to Tweet This)

Too Much Glucose in Microenvironment

Epidemiological research has shown that excess glucose (sugar) in the blood (hyperglycemia) in obese patients and in diabetic patients results in higher risk of certain cancers.  Bissell’s 2014 study may explain why.

When exposed to too much glucose, Bissell found that organized breast tissue–cells in acini (plural of acinus)– are more likely to become disorganized. The microenvironment, with the ECM structure, signaled to oncogenes in the cells to become active. Unregulated, cancerous growth occurred.   But when the researchers reduced the glucose in the microenvironment of the breast cells, the acini became organized again–the cancerous cells became normal.(<=Click to Tweet This)

“To our knowledge, this is the first report in which changed glucose uptake alone has been shown to have such profound consequences on the behavior of nonmalignant and malignant epithelial cells.”   Bissell and her team again moved research into cancer cell microenvironments further.

Why is this important to us?  How can we use this information?

Since our cells are fed by our blood, the microenvironment that our cells live in is affected by what we eat and what we do.  The amount of glucose in our blood can be controlled by our actions.  For example, taking a thirty minute walk after eating can reduce blood sugar levels and burn off extra glucose.  Counting calories, eating a high fiber diet and watching carbohydrate intake can help manage blood glucose levels.

As pointed out in an earlier post, reducing your weight and increasing your physical activity are associated with better outcomes for survivorship for those who have breast cancer. Dr. Bissell’s recent research seems to indicate that reductions in sugar intake, watching what you eat and increasing your physical activity may be instrumental in changing the microenvironment of your cells. (<=Click to Tweet This)

Looks like it’s time to go take a walk.  See you later!