Lung Cancer and the United States: Facts and Statistics - Medivizor
SIGN IN

Lung Cancer and the United States: Facts and Statistics 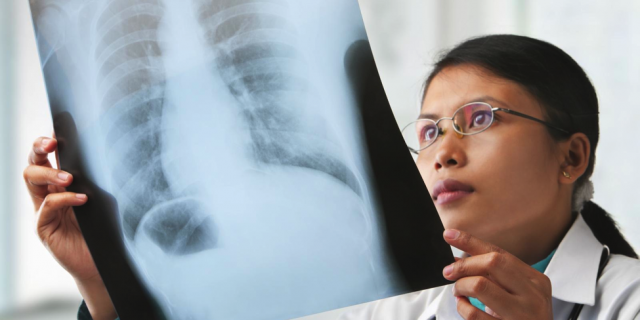 Our body consists of trillions of cells that follow a certain cycle of growing, dividing, and dying. When these cells grow out of control, they may become cancerous and invade other tissues. Cancer is a group of over 100 diseases, distinctive by the uncontrolled growth and spread of abnormal cells, and if remain untreated, may even cause death.

According to the American Cancer Society, almost 1,660,290 new cancer cases are expected to be diagnosed this year. Some of these individuals were previously cancer-free, while others still have evidence of cancer, and some still may be undergoing treatment. Several types of cancer include breast cancer, colon cancer, kidney cancer and lung cancer, the latter having the most recorded number of deaths.

Lung cancer is the number one leading cause of cancer death in men and women in the United States. It also causes more deaths than the next three common cancers combined (breast, colon and prostate). Lung cancer begins in the lungs and may continually spread to lymph nodes or other organs in the body. Lung cancers are usually grouped into two main types: small cell and non-small cell; non-small cell being the more common.

Different people who have lung cancer may have different symptoms. Some may show symptoms related to the lungs, while others whose lung cancer has already spread out to other parts of the body, may have symptoms specific to that body part. There are also some people who don’t show any symptoms until the cancer is in its advance stages.

Based on 2008 SEER Cancer Statistics Review, each year an average of 125,522 Americans died of smoking-attributable lung cancer, from 2000 to 2004 alone, and exposure to second-hand smoke caused 3,400 lung cancer death among non-smokers. Non-smokers also have 20-30% greater chance to develop lung cancer when they’re exposed to too much second-hand smoke.

Radon exposure is the second leading cause of lung cancer, which accounts for an estimated 15,000-22,000 lung cancer death every year. Radon is an odorless, colorless and tasteless gas produced by decaying uranium that occurs naturally in soil and rock. The majority of deaths occur mostly to smokers because they are already at high risk prior to radon exposure. Other causes may include occupational exposures (asbestos and uranium) and environmental exposures.

There are several medical therapies that can help treat lung cancer like surgery, chemotherapy, radiation and palliative care. These can be administered alone or combined in the attempt to cure or lessen the adverse impact of the malignant tumors in the lung tissue. Surgery is usually the treatment of choice for those with localized non-small cell lung cancer, and survival is mostly improved by using chemotherapy.

David Novak is a nationally syndicated columnist, and his byline has appeared in newspapers and magazines around the world — including USA Today, Reader’s Digest, GQ, Cosmopolitan and Wall Street Journal.  He’s an avid health enthusiast, and frequently is featured in regional and national health publications, writing about health, fitness, diet and wellness. He is also a weekly writer for Healthline.  To visit his other stories on Healthline, visit http://www.healthline.com/.