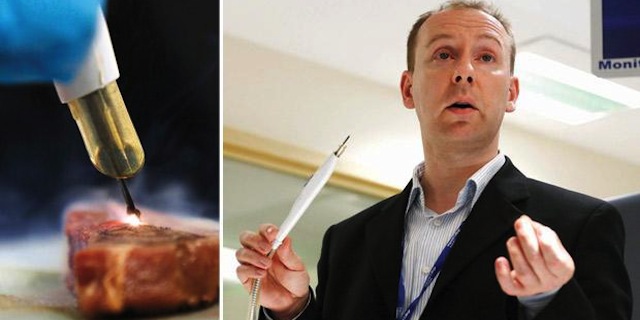 You may not believe it but there are times during surgery when smoke is released into the air.

What?  TMI? (too much information?) Well actually, there is information in that smoke.

There are surgical procedures that involve what is called electrosurgical dissection, electricity flows through the surgical knife and “cauterizes” as it cuts.   During that cauterizing (or burning) smoke is produced.  There are researchers who are interested in that smoke or “aerosol” as it is referred to in the literature.  Using “rapid evaporation ionization mass spectrometry or “REISM” these researchers are able to analyze the molecules, like proteins, fats and other components of the aerosol.

The iKnife or intelligent knife, is a new tool that pairs the cauterizing electrosurgical scalpel with the REISM technology.  Researchers conducted a study recently to find out just how well the iKnife is able to discern cancerous tissue from non-cancerous tissue at the time of surgery.  First, in the lab, the researchers analyzed tissue from 302 patients using the iKnife to identify 1624 cancerous and 1309 non cancerous tissues.  Then in the operating room, it was used on 81 cases.  Comparisons were made between microscopic examination of the 81 samples and the identification made by the iKnife.  The iKnife predicted the cancers, even metastases, 100% of the time.

The iKnife could be very useful in surgeries like lumpectomies.  In these surgeries, surgeons are looking for “clean margins” meaning they are trying to cut out the cancer and leave normal tissue.  Patients may go through repeated surgeries if the surgeon does not find clean margins.  Devices like the iKnife could reduce repeat surgeries.

However, the iKnife is in the early stages of the approval process.  It must go through clinical trials and get regulatory approval.

When the smoke clears and approval is imminent, we’ll let you know.